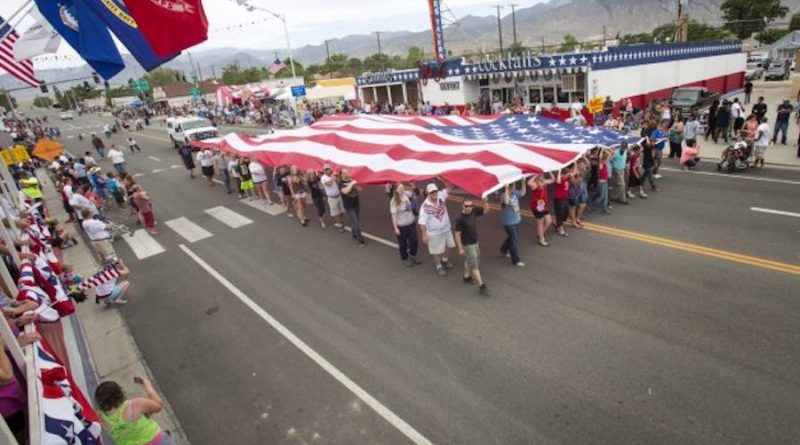 Under a clear blue sky, Main Street will be covered in red, white and blue for the parade on Saturday and entries include marching bands, military themed floats and princesses in monster trucks. The parade begins at noon with Grand Marshal Lt. Col. Scott Bishop.

Hawthorne is a one-hour drive south of Fallon, where visitors will experience the best of the spirit of rural Nevada. There is something for everyone every day in this one-stoplight town that is home to the largest United States Army ammunition storage facility in the world.

As usual, there are plenty of events on tap this weekend. The Kenny Bostic Memorial Athletic Fund “Richest Chili Cook Off in the West” begins at 10 a.m. at Barley’s Sports Bar as well as the 58th annual Walker Lake High Desert Art Show at Souled Out. Not new this year – just bigger will be arm wrestling at Barley’s. A street dance, pin-up contest and the El Capitan Casino Firework show will conclude Friday night.

Saturday morning starts off with the Hawthorne Elks Lodge serving a pancake breakfast beginning at 7:30 a.m. to start your day off right. Motorheads will be setting for a show and shine downtown and Greg Mohr will have his Kiddie Ferris Wheel Rides up by 9 a.m. at 5th and E Street.

Betty Easley has a static display at the Hawthorne Airport beginning at 9 a.m. with warbird planes for young and old to see. The Mineral County Museum as well as the Hawthorne Ordnance Museum will be open beginning at 10 a.m. so that you can walk through and reminisce about days past.

The parade begins at noon with the whistle and flyover. Following the parade, with more than 70 entries, the Armed Forces Day Committee has youth events planned after the parade. Mineral County Search and Rescue will open up the Old Courthouse and 6th Street School for self-guided tours.

Tricycle races, always good for a laugh, will begin at 7 p.m. on Saturday night along with the Rye Brother’s Band, featuring hometown boy Paul Justin at 9 p.m. at Joe’s Tavern.

T-shirts and buttons are available at local merchants around town.

President Harry S. Truman  set the day aside to honor men and women in the armed forces. This day celebrates each branch of the military together on one given day.

The first Armed Forces Day theme was “Teamed for Defense” on May 20, 1950. On that day, B-36 Bombers flew over state capitals and Washington, D.C. and more 33,000 participated in the parade in New York City.

Not just a day for a parade, the day also helps to educate society and public knowledge about the military and the role they play in communities. Hawthorne knows the roll the military plays in this small town. This is just a way to say “Thank You” to those who go above and beyond to protect our county.

A big hit is Cecil the Serpent, who weaves his way down the street showing off his pearly white teeth.

A great balance of family-oriented activities as well as adult and children fun and games are provided by businesses and the Armed Forces Day committee. From burn-out contests, a pin-up contest to watermelon eating contest and hamster balls at the park, people can keep busy throughout the day and night.

A quote from 1953 explains why we celebrate this day, “Our Servicemen and women are serving throughout the world as guardians of peace – many of them away from their homes, their friends and their families. They are visible evidence of our determination to meet any threat to the peace with measured strength and high resolve. They are also evidence of a harsh but inescapable through – that the survival of freedom requires great cost and commitment, and great personal sacrifice,” President John F. Kennedy.