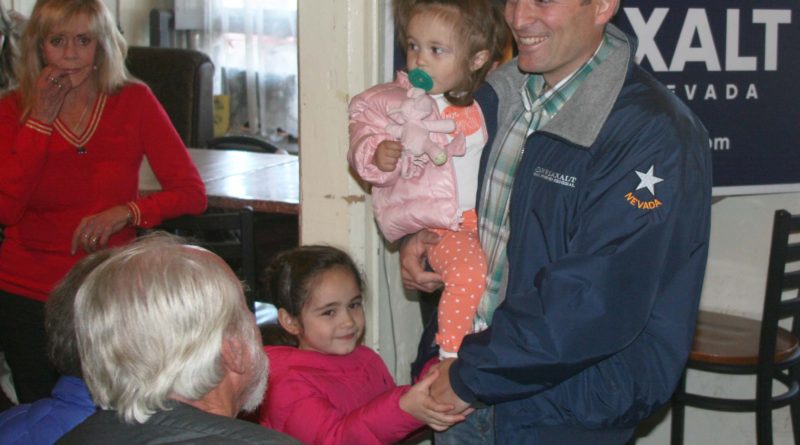 It was boots on the ground, most of them in the rural parts of the state, that carried Adam Laxalt past Ross Miller in the race for attorney general in 2014.

Monday, on the 18th stop of the “Laxalt 17,” Laxalt’s statewide tour that kicked off his campaign for governor with 20 stops in 17 counties, he urged his supporters to use the same formula in his race for governor.

Laxalt formally announced his candidacy for governor in the first stop on the tour, at Brady industries in Las Vegas on Nov. 1. Later that day he spoke at Peterbilt in Sparks, before visiting each of the rural counties. The tour had originally been scheduled in October, but was postponed because of the mass shooting at the Route 91 Music Festival on the Las Vegas Strip the night before it was to begin.

Monday Laxalt was greeted by about 70 supporters at the Red Dog Saloon in Virginia City, and the Laxalt campaign said a total of 1,231 supporters came out over the first six days of the tour.

“It’s incredible to see so many people at 1 o’clock on a Monday afternoon in Virginia City,” he said.

Laxalt has been joined throughout the tour by former Governor Bob List and Carol Del Carlo of the Nevada System of Higher Education Board of Regents, and was introduced Monday by Assemblyman Jim Wheeler. The crowd included State Sen. James Settlemyer, Storey County Commission Chairman Marshall McBride and several other local officials.

“What he’s done in that office is incredible,” List said. “He’s a man of incredible character. He is decent, he’s honest, he’s smart as can be, his vision for Nevada is good, and his history, in my judgment, prepared him for the governorship.”

In his speech, Laxalt talked about his troubles with alcoholism as a teenager, and how going to treatment, at the insistence of his mother and grandfather, turned his life around.

“I wouldn’t be here without that important step in my life,” he said.

Laxalt talked of attending the University of Georgetown, of joining the U.S. Navy after the terrorist attacks of Sept. 11, 2001, serving in Iraq and Afghanistan, and then serving as a professor at the U.S. Naval Academy, where he said he met his wife, Jaime, when he sat next to her in church.

Laxalt highlighted several of his accomplishments as attorney general, specifically addressing the state’s sexual assault kit backlog; setting up the Office of Military Legal Assistance country’s first pro bono legal representation for members of the military out of an attorney general’s office; the Federalism Unit that has challenged federal regulations including the BLM’s Sage Grouse Plan and the EPA’s Waters of the United States Rule; and programs to combat elder abuse and fraud.

He hinted broadly at policy, saying his priorities are economic development, education and public safety, without getting into specifics.

“We’ve got a lot of great teams that are put together, and we’re putting together a number of policy proposals that we look forward to rolling out in the coming weeks and months ahead.,” Laxalt said in an interview after the speech.

But the main focus of Laxalt’s speech was the rally his supporters to action, urging them to talk to their neighbors, take to Facebook and spread the word about his campaign and his promise to represent all of Nevada.

“I need all of you to be a part of this big project,” Laxalt said. “I want to meet and see Nevada voters. I want all of you to help me write the next chapter of our great state.”