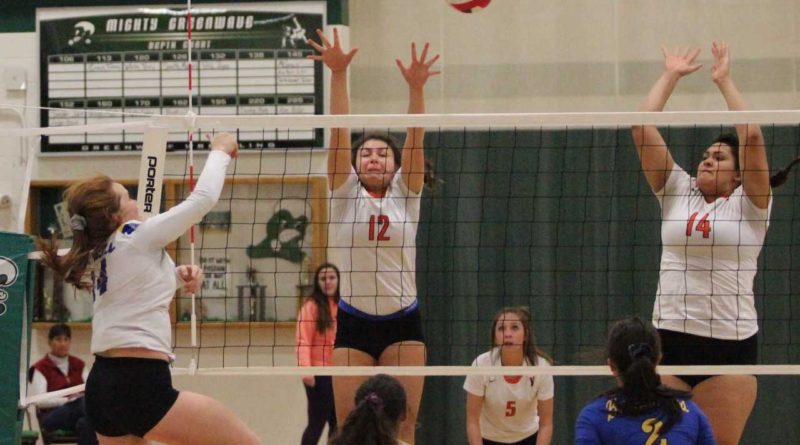 By Steve Ranson and Robert Perea

Lowry defeated Fernley in three sets Saturday in the semifinals of the NIAA 3A North Regional Volleyball Tournament at Fallon’s Elmo Dericco Gym.

The first set went back and forth until Lowry took charge with a 9-8 lead. Up until that point, neither team could mount any sustainment although Fernley’s Abby Martin and Raye Arroyo each had a kill, while Lowry’s Kyllie Sappinton recorded a pair of kills.

Lowry pulled away 4-1 before Fernley took a timeout. Jayden Eastman had a block, and Brittany Jacaway had a well-timed kill for the No. 2 team.

The Lady Bucks increased its lead by as many as eight points, 20-12, due to Sappington’s serving until Colby Johnson smashed a kill for Fernley. Down the stretch, Fernley committed five forced errors.

Fernley grabbed an 8-2 lead early in the second set on two serving aces from Natalie Stewart and Brittney Gaitan’s block. Martin chipped in with a kill from the left side. Lowry then cut the lead on several Fernley errors, but the Vaqueros’ Katelyn Garnett had a kill, and Jaiden Sullivan served an ace.

Lowry tied the set at 15 on a serving ace from Tailor West, and after that, the lead changed twice before Lowry pulled away with a 7-4 run.

Sappington had a kill from the left side, a two-handed tip and her final kill to give Lowry a 23-20 lead. Fernley then responded with Garnett, who tipped the ball over the net.

Lowry never trailed in the third set although Fernley came within a point twice midway through the game. Fernley struggled with its errors, while Lowry relied on Sappington’s play from the outside. Garnett, though, had a kill for Fernley.

Lowry’s dominance at the net made the difference with Eastman, Jacaway and Brooke Hansen. Fernley, though, tightened the set, 17-16, after Arroyo slammed a kill off the back row. For the rest of the set, Lowry surged ahead on an 8-5 run with Sierra Maesrtrejuan accounting for three consecutive points. Fernley had help from Arroyo, who had a kill down the right side and a return Lowry couldn’t handle.

Jacaway responded with a kill of her own that ricocheted off a Fernley player.

Lowry played Truckee in the finals later in the day and won in five sets. Both teams advance to this weekend’s state tourney in Las Vegas.

Fernley showed a strong finishing kick in the next two sets as well.

Both the second and third sets were tied at 13 before Fernley took control.

“We have a tough league and it takes every play in every game to come up on top,” Fernley coach Dave Trujillo said. “Overall I think we played well. It was nice to get some jitters out of the way, overall I thought we played steady, good volleyball.”

In the second, Fernley scored five straight points to go up 18-13. A kill by Arroyo made it 22-14, then a point later, Stewart made a diving save and Katelyn Bunyard bumped it over the net for a 24-14 lead, and a Dayton hit sailed out to seal the set at 25-14.

The third set was tied at 13, 14 and 15, but after a long rally featuring diving saves by both sides, a kill off the block by Garnett gave Fernley a 16-15 lead it never relinquished.

Leading 19-16, Bunyard served three consecutive aces for 22-16 lead and Arroyo finished the set with kills for two of the last three points.