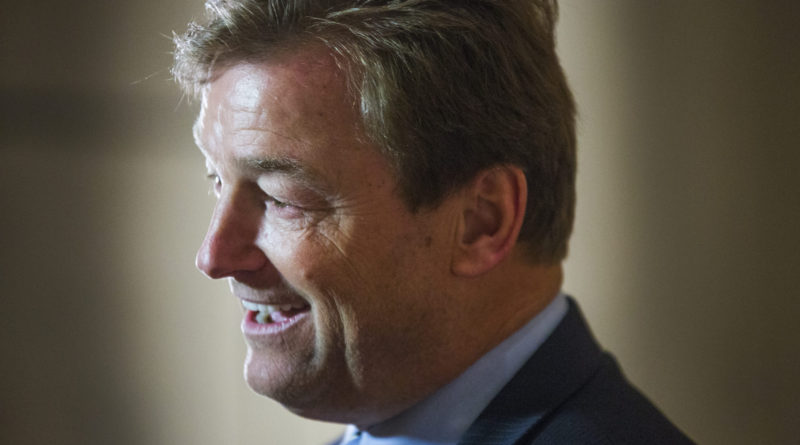 “As tired as I am right now, I think I am running on adrenaline right now after we were able to achieve such a historic piece of legislation,” Heller told a crowd gathered in a Palace Station ballroom.

The comment drew some cheers and jeers, which has become par for the course any time Heller attends a public forum in Southern Nevada. Organizers led more than a handful of people out of the room during the event after they interrupted and repeatedly shouted at the senator. The first disrupter pointed his finger at Heller and demanded to know if he had read the tax bill.

The question prompted Heller to reply via Twitter shortly after the event: “I was asked earlier today if I read the tax bill… Read it? I helped write it!”

Despite the sometimes-hostile crowd, Heller spent nearly 50 minutes onstage with LIBRE Initiative’s president, Daniel Garza, mostly explaining his support of the tax reform package. He emphasized the bill’s ability to keep the United States competitive — by lowering the corporate tax rate from 35 percent to 20 percent — and thereby creating jobs and increasing wages.

“The White House does understand something that we’ve been talking about for years and that is you cannot tax your way out of this deficit problem,” he said. “You can’t cut spending enough to solve this deficit problem. What you have to do is grow this economy.”

At one point, Garza asked Heller how the tax plan would help members of the Las Vegas community, which has a median household income below the national average.

Heller pointed to reforms such as doubling the standard deduction and increasing the child tax credit — the latter of which he said was his amendment (he had proposed a doubling of the credit with South Carolina’s Tim Scott) — as ways the tax bill will help local families. But he also acknowledged the measure could be a work in progress.

“Nothing is perfect and we realize that we’ll probably have to make some adjustments down the road, but this is what we could pass today,” he said.

Heller, who’s facing re-election in 2018, also rejected the notion that the bill favors the wealthy. He said that’s the standard mantra used by Democrats anytime there’s a tax reform effort.

“It’s not about the top,” he said. “It’s about the middle income. It’s about those that the do the work on a day-to-day basis — making sure we can increase your salaries and that your job is secure.

Tax reform isn’t a done deal yet. The bill now heads to the House, which must decide if it wants to pass the Senate version or go to conference to reconcile differences between the two Republican-led measures. The House passed its GOP-backed tax reform bill last month.

“Just because it has passed out of both houses doesn’t mean our work is done,” Heller said, encouraging people to call their congressional representatives.

But a tax package isn’t the only major piece of legislation that Heller thinks could be accomplished before the the holidays. The senator expressed confidence that Congress will begin looking at immigration policies and possibly enact a legislative fix to the Deferred Action for Childhood Arrivals program by the end of the year.

President Trump in September ordered the gradual wind-down of the DACA program, which has shielded immigrants brought illegally to the country as children from deportation. In doing so, Trump put pressure on Congress to act on the issue.

“I feel very, very strongly that we’re going to get there,” Heller said.