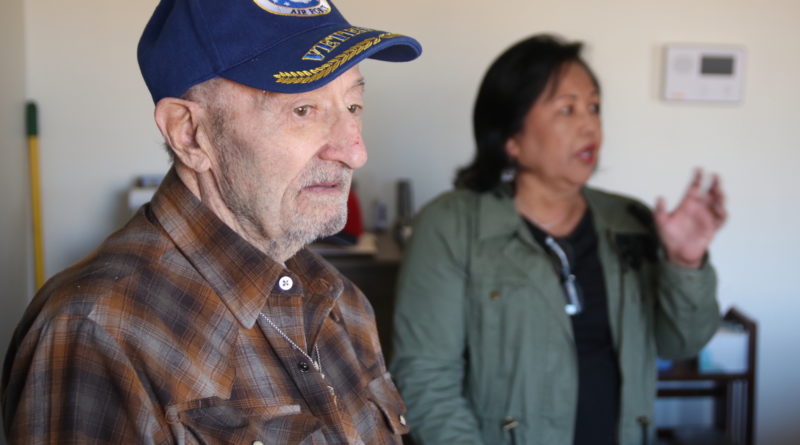 Since 2011, Home Depot Foundation helps improve veterans’ lives including those in Northern Nevada

FERNLEY — His eyes focused on two women replacing an inside door knob in the living room, while others scurried around his yard — raking, hammering and sawing.

He stood several feet behind the women, one hand placed on the back of a chair. U.S. Air Force veteran Martin Harka of Fernley was at a loss for words, and every time he wanted to say something, he paused to think of the ways he could say thank you to a houseful of strangers.

For one day at the beginning of November, Home Depot volunteers from Northern Nevada converged on the 86-year-old Harka’s modest Fernley home to perform repairs from painting, redoing the lattice, fixing the wheelchair ramp, hanging a new screen door and performing light landscape. Based on a recommendation from the Nevada Veterans Coalition, the Home Depot Foundation selected Harka as this year’s recipient for the its program to give back to the veteran community.

“I was very surprised because I never heard of the program,” said Harka, who spent 20 years in the military, retiring in 1971 as a tech sergeant.

Harka enlisted in the Air Force in 1950, the same year the Korean War broke out, but when his initial enlistment ended, Harka left the Air Force. After eight months, he decided to re-enlist and then stayed another 16 years. His career took him to the Republic of Korea’s Osan Air Base and then to Japan for four years. He served in Hawaii and also stateside in South Carolina and Westover Air Force Base (currently the largest U.S. Air Force Reserve base) near Springfield, Mass., before heading to South Vietnam for his last tour, where he worked in administration for a year.

“I kind of did everything,” he said, with a sparkle dancing in his eye.

Harka and his wife, Toyoko Yoshikawa, whom he met and later married in Japan, moved to Pennsylvania, but they decided to head west in 1992, relocating in Sparks. Sadly, though, Harka moved to Fernley in 2017 to be closer to his wife of 54 years who died two years prior to his final relocation. He met Toyoko when he was an airman assigned to Fuchu Air Station near Tokyo in the 1960s, yet his memories of her are shrouded in love. Harka pointed to a vertical black-and-white photo of a young Harka and his wife that rests on top of an entertainment center in the living room.

“I’m overwhelmed with their attitude,” said Whiting, who has a stepson currently serving in the U.S. Navy. “They are using their day off to help someone else. It’s moving.”

Whiting said the Home Depot employees have a personal interest in serving the communities. Of Home Depot’s seven Northern Nevada stores, Whiting said volunteers came from six stores in the Reno Sparks-Carson City area including two local stores on Market Street and Jacks Valley Road. Because of its distance, she said it was difficult for Elko employees to travel to Fernley for the day. Elko’s Home Depot employees, instead, volunteer their time helping with veteran and community projects in northeastern Nevada.

Since Home Depot’s national program to help veterans began in 2011, Whiting said the company has impacted more than 45,000 veterans and veterans’ cemeteries such as the NNVMC. In eight years, Whiting said the foundation has committed half of a billion dollars to veteran projects, and every year, she said Home Depot sets money aside and then awards grants. For example, Home Depot awarded a grant in 2018 to the NVC for improvements to the veterans’ cemetery. In return, the coalition sponsored Harka’s application.

“It makes me feel good to give back,” said Deana Madrigal, human resource director for the Summit Ridge store. “Home Depot gives me the freedom to do this.”

Whiting said a Home Depot team came out to Fernley and talked with Lorene Addison, administrative assistant at NNVMC, and Harka about the projects. Addison said she’s known Harka for three years and calls him a veteran “true to his branch of service.” Addison said the Home Depot Foundation donates its services and goods to a local resident.

“We went through Martin’s needs to make his lifestyle easier,” Whiting added.

Madrigal said the volunteers are limited on the areas they can fix, but she said Home Depot has experts in helping identifying the needs and how they can assist. Peggy Koniak, who’s with human resources at the Carson City store and is a team captain, said the stores have key people to contact.

“We reach out to a resource person to get the projects together,” she said.

Both Koniak and Madrigal worked in Harka’s living room for most of the morning. Koniak said she has also worked on several Carson City projects at Richards Crossing and the Lone Mountain Cemetery where volunteers did some landscaping and reset headstones.

Army veteran D.J. Green, who served in the military for four years and did a tour in Afghanistan, considers his volunteerism as a way to “Pay It Forward.” A Home Depot employee for three years, Green grew up in Carson City, but graduated from high school in Florida.

Traci Allen served in the U.S. Marine Corps from 1989-2012 in small arms repair and deployed during Desert Shield and later to Iraq. Allen grew up in Hawthorne but now lives in Carson City. This year’s project at Harka’s house was the first time she’s volunteered, and the experience has left her in awe.

“This means a great deal to help another vet,” she said. “It’s a privilege for Home Depot to do something for our veterans and community as well,” she said. “This is a great thing Home Depot does and says a lot for it as a corporation for the things they do for the veteran family.”