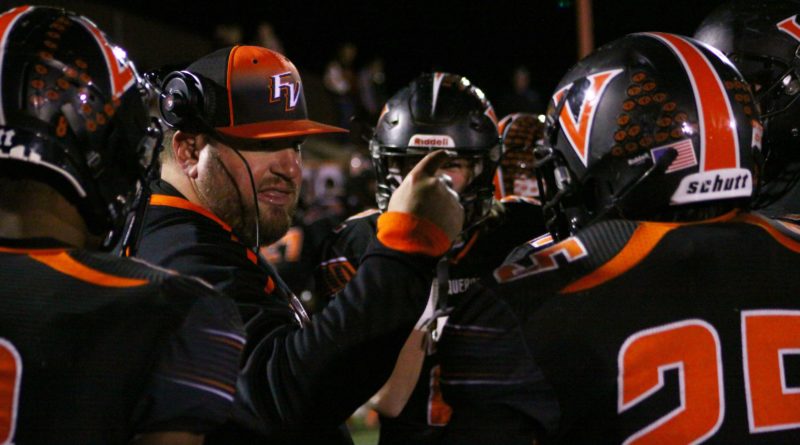 Having racked up 385.2 yards and 38.2 points per game, it’s been mostly the offense, and the players who have compiled those stats, that have gotten the most attention this season for the Fernley Vaqueros.

But it’s the defense, which ranks second in the Northern 3A in almost every major category, that has led Fernley’s rebound from a 1-2 start in league play to a 7-2 finish and the No. 2 playoff seed. And, if they are to fulfill their dreams of a state title run, it’s the defense that will have to hold up its end of the bargain.

After having a bye during the first round last week, the Vaqueros will start that playoff journey when they host Truckee in a quarterfinal game Friday at 7 p.m.

And was against Truckee, incidentally, when defensive coordinator Jake McCullar realized that in addition to the athletes in the back end of his defense, he also had a stout group up front that made the whole mix work.

All summer, throughout offseason workouts and the beginning of preseason practice, McCullar saw time and again that he had a defense loaded with athletes who could run, but who, with a couple of exceptions, lacked the ideal size for the positions they were being asked to play.

Against many of the spread offenses that have become all the rage in modern football, that’s not only not a problem, but a necessity. The question in McCullar’s mind, however, was whether the Vaqueros could stand up against the teams that would line up and run the ball right at them.

In the Vaqueros season-opening 24-0 win over Bishop (Calif.) Union, the Vaqueros allowed only 38 yards rushing on 18 attempts, but it was against a scheme that relied mostly on jet sweeps and other outside runs.

That’s a scheme that plays into exactly what the Vaqueros try to do defensively. But the next week, the Vaqueros held Truckee to 14 points, with seven of those coming against backups after Fernley had a 41-7 lead, and just 121 yards on 44 carries, an average of 2.8 yards per carry.

The Vaqueros play what McCullar calls a “spill and rally” defense, in which their goal on running plays is to force the ballcarrier toward the sideline away from his blockers, then swarm to the ball.

The Vaqueros weakside linebacker, Kyle Jones, weighs about 150 pounds, at a position that is more typically around 190 in the Northern 3A. On the other side, strongside linebacker Bailey Torres, who McCullar said is one of the best defensive players the Vaqueros have, is about 160 pounds, at a spot that is normally closer to 210.

“We’re a little light in the shorts, so we don’t want them running right at us,” McCullar said. “Push it to the sideline, and run it down.”

The Vaqueros play a four-man defensive front that functions as a mix between the 4-3 and the 4-2-5, because one of its outside linebackers plays a sort of hybrid linebacker/safety role, with responsibilities changing depending on the offense’s alignment.

And, with the exception of two games, that defense has been dominant.

In league play, only Fallon and Lowry have scored more than 14 points against the Vaqueros, and the other team that did, El Cajon (Calif.) Christian, had just 10 at the end of the third quarter when the Vaqueros took their starters out of the game.

In the Vaqueros’ gap control scheme, every player is responsible for a specific gap, depending on the alignment of the offense.

While they might look to penetrate into the backfield and cause disruption against certain specific running plays, in most situations, each player’s responsibility is to control his gap and stand his ground at a depth of the offensive lineman’s heels, effectively building a picket fence that gives a runner nowhere to go except toward the sideline. The Vaqueros four defensive linemen, tackles Setriano Piroddi and Alec Carr, and defensive ends, David Sisneros and John Owens, are asked to occupy all five offensive linemen, or six if a tight end is blocking, so the linebackers will be unblocked and can run to the ball. If they can beat a blocker or two and get in on a tackle, all the better.

“There’s a reason our linebackers have the most tackles on the team, because they are to come unblocked, scrape and fill,” McCullar said.

Although this requires all 11 defenders to be perfectly in sync, McCullar said they only practice as a full defense about 10 minutes per day. The rest of the defensive time is spent in position groups, to better work on each individual’s responsibility.

“One thing you hear about us, you hear us on the sideline, “Read your keys, and do your job,’” McCullar said. “Everybody has keys, and everybody has a job. We don’t do freelancers and stuff like that.”

The Northern 3A brings particular challenges to defenses because of the variety of different offensive schemes teams run. But McCullar said the Vaqueros’ base defense is designed so that each player’s responsibilities can be changed from game to game, or even play to play, depending on how the offense lines up.

“We’re not just, ‘This is what we run and we don’t change,’” McCullar said. “Offenses have gotten too good. They score too many points, we can’t stay the same.”

Thus, in game situations, it’s up to the players, particularly middle linebacker Tucker Hall and free safety JR Reyes, to identify the strong side of the offensive line, the formations, and make sure everybody on the defense knows which gap or man they’re responsible for.

Hall, the middle linebacker, leads the Vaqueros and was fourth in the Northern 3A with 93 total tackles. Kyle Jones was in on 71 tackles while his fellow outside linebacker Bailey Torres had 61.

Defensive end David Sisneros leads the team and is second in the league with seven sacks and he was also credited with 12 quarterback hurries.

As a team, the Vaqueros ranked second in the league with a total of 20 sacks, an average of two per game, which may not sound like a lot until you realize that since Fernley’s opponents only averaged 18 pass attempts per game against them this season, they sacked the quarterback on about 10 percent of opposing pass plays.

While the defensive line and linebackers are responsible for their specific gaps, the Vaqueros’ cornerbacks play a press man-to-man, with the safeties and outside linebackers in bracket coverage, which gives them the ability to disguise their coverage and still double cover a specific receiver. That also makes it difficult for teams to throw quick passes such as jab screens, bubble screens and hitches.

And rather than playing strictly on the right or left side of the formation, each cornerback is usually assigned to a specific receiver on the offense, and will match up with that receiver no matter where he lines up.

“I don’t want our third guy going against their No. 1,” McCullar said. “We put our kids in the best matchups possible, so they can be advantageous.”

When it’s all boiled down to the core, McCullar believes in the old adage that offense wins fans, and defense wins championships, and he’s told his charges it’s on them if the Vaqueros want to reach their dreams this postseason.