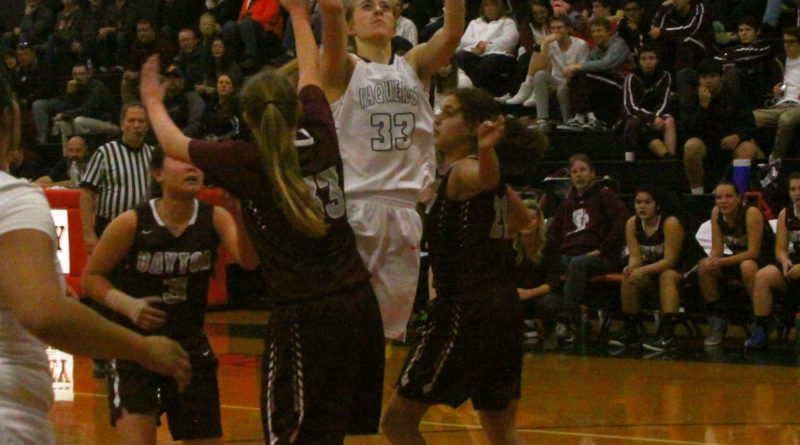 The Fernley High School girls basketball team has reached the halfway point of the Northern 3A League season in sole possession of second place.

The Vaqueros beat Dayton 54-15 last Friday and Truckee 57-46 to make the turn in league play with a 7-1 record, 12-7 overall, and one game ahead of Spring Creek for second place.

Fernley plays at Elko at 6 p.m. Friday and at Spring Creek at 1 p.m. Saturday.

Against Friday, the Vaqueros left no suspense, outscoring Dayton 27-0 to start the game, never looking back.

“We came out in our typical style that we normally do and we were able to get what we wanted,” coach John Rogers said. :It was getting scary at the beginning because we couldn’t score the ball. Once we settled down and did what we do we were able to pull away.”

Hailee Edgar was the only Fernley player to score double figures with 13 points, but 11 different players scored. Celeste Condie had 7 points, and Jaiden Sullivan and Erica Kingston scored 6 each.

“It’s always good that we can get more girls involved,” Rogers said “That’s the longest we’ve played a zone all year long. They’re our neighbors and we just wanted to have a good atmosphere and try to not do anything negative toward each other.”

Saturday’s game was a little closer, but the Vaqueros held a lead in double digits most of the game. Fernley led 17-7 after a quarter, 28-15 at halftime, and built it to 40-21 going to the fourth quarter.

But after scoring only 21 points in the first three quarters, Truckee put up 25 in the fourth to narrow the margin.

“We got a little sloppy and slow footed defensively in the fourth, but we were able to still hold on, Rogers said.

Condie led the team with 14 points, Sullivan had 13 and Brittney Gaitan scored 10, while Edgar finished with 9.

“The girls are doing a much better job finding each other and trusting the offense,” Rogers said. “They are seeing the court better and cutting down on forcing and silly mistakes.”

In the second half of the league season, the Vaqueros will face other playoff contenders Elko, Spring Creek, Fallon and Lowry on the road.

“We’ve got to really focus and make sure we’re playing at this level when we play them, and most of those games are going to be on the road,” Rogers said.