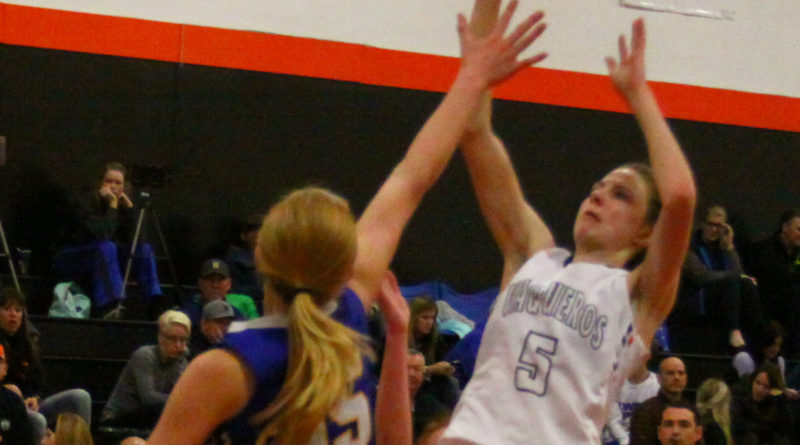 Coming off a pair of losses to Fallon and Lowry last week, the Fernley High School girls basketball team was in need of two wins this weekend to get back on track.

By beating Truckee Thursday and South Tahoe Friday, the Vaqueros did just that.

The Vaqueros beat Truckee 61-20 Thursday in the makeup of a game that was postponed twice because of weather, then outlasted South Tahoe 62-46 at home Friday night.

With the wins, the Vaqueros moved to 5-6 in league play, and will head into next week either in fifth place, or tied for fourth with Spring Creek, depending on the outcome of Spring Creek’s game Saturday afternoon at Truckee.

The Vaqueros also own a potential tiebreaker over South Tahoe (4-6) by having swept the season series.

Fernley was able to hold on after a lead that had been as much as 12 in the first half was cut to 44-41 near the end of the third quarter. The Vaqueros scored the last two points of the third quarter and first 9 of the fourth to stretch the lead back to 53-41, then put the game away by hitting 7 of 10 free throw attempts in the final 2:09 of the game.

“We’ve been really working on moving on to the next play because we really have struggled this season allowing mistakes to get into our heads,” coach John Rogers said. “We’ve finally started getting that next play mentality.”

The Vaqueros attempted 16 free throws in the fourth quarter, drawing many of the fouls while attacking the basket after beating South Tahoe’s press.

“Our offense needs to be run patiently, but we also need to be able to attack when it’s open,” Rogers said. “A lot of teams have tried to press us early and gotten out of it real quick.”

Both Fernley and South Tahoe stuck with their presses throughout, leading to a ragged finish. South Tahoe attempted 14 free throws of its own in the fourth quarter, but made just 4.

“I just think both teams exerted so much energy their legs game out,” Rogers said. “We’re pressing, they’re pressing, and it was constant back and forth.”

Rogers was particularly pleased with the way Edgar controlled the flow of the game.

“Goose, she has really started to shoot the ball a lot better the last couple of weeks, and with her shooting her assists go up,” Rogers said. “She’s seeing the game real well and her teammates are feeding off it, and it’s fun to watch.”

Rogers said the game, compared to the first meeting of the teams in December, shows how the Vaqueros have begun to mature. In that game, the Vaqueros had the lead, as they did Friday, but let it slip away and had to come back from behind.

“They’re dealing with adversity and their understanding of situations is better,” Rogers said. “You’re not just protecting a lead, you’re forcing them to do things outside their comfort zone.”

“Girls played really well together and got a lot of easy buckets off turnovers,” Rogers said. “We were able to execute anything we wanted on offense and were able to knock down the open shots.”

Edgar had 21 points against the Wolverines, and Jaiden Sullivan added 11.

This week the Vaqueros go back on the road, playing at Dayton Tuesday, at Spring Creek Friday and at Elko Saturday.