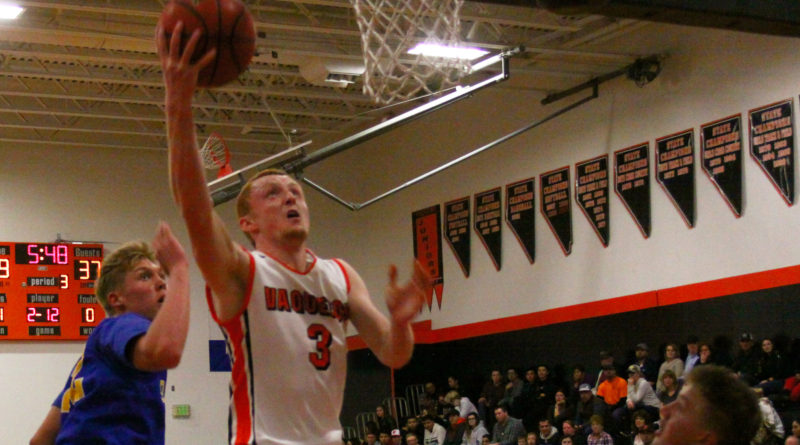 The 3A North Region Tournament doesn’t take place for another three weeks, but the six teams that qualify will be hard pressed to top the battle between South Tahoe and Fernley Friday night.

In a game that featured a high level of execution, big runs by each team and a dramatic finish in a playoff atmosphere, South Tahoe went home with a 64-61 win over the Vaqueros.

“I thought we competed great, it was a good atmosphere, but at the end of the game we just came up a little short,” Fernley coach Derek Miller said.

After a timeout with the game tied at 61 and 1:31 left to play, South Tahoe went into a delay to try to draw Fernley out of its zone defense. The Vaqueros didn’t abandon the zone, but extended it on the perimeter, and South Tahoe’s McCallan Castles drew a foul trying to attack the basket.

Castles hit 1 of 2 free throws with 37.2 seconds left, but with a chance to take the lead, Fernley instead turned the ball over on a backcourt violation with 25.4 seconds left.

South Tahoe’s Tomy Cefalu broke free on the inbounds play and scored on a layup to give the Vikings a 64-61 lead with 22 seconds left.

Fernley called time out with 13.8 seconds left to draw up a final play, but was only able to get a contested 3-point shot that was short just before the buzzer.

“I told the players, against good teams like that you can’t make turnovers late,” Miller said. “We just had some bad possessions.”

The Vaqueros had survived a big third quarter by the Vikings, who turned a 37-30 Fernley lead in the closing minute of the first half into a 56-46 South Tahoe advantage with 2:05 left in the third quarter.

The South Tahoe run was capped by a two-handed dunk by Castles off a lob pass from Cefalu.

Fernley responded immediately, regaining the lead with a 14-3 run started by a 3-pointer by Zach Burns.

Justin Turner finished the run by hitting 1 of 2 free throws with 3:03 left in the game.

Fernley had assumed control in the second quarter, after a back-and-forth opening period.

Ren Arroyo, who came into the game averaging 6 points per game and having attempted only seven 3-pointers, making two, hit two triples in the first quarter and had 14 points in the first half, finishing with his career high of 21.

Ren played great,” Miller said. “Probably the highlight of the night for me was him.”

A layup by Arroyo on an inbounds pass gave Fernley a 29-24 lead, and Fernley’s biggest lead of the game came at 37-30 when Burns beat his man for layup.

“We responded, it’s just the little things we’ve got to do down the stretch that beat us,” Miller said. “We show glimpses, but we’re still improving, still a work in progress.”

Burns followed Arroyo with 16 points and Justin Turner had 11, but the rest of the team combined for only 11 points.

The loss snapped Fernley’s winning streak, which stretched to 6 games with a 76-49 win at Truckee Thursday night.

Against the Wolverines, Burns had 27 points and both Drake Howe and Arroyo added 13.

Next week the Vaqueros go on the road for three games, at Dayton Tuesday, at Spring Creek Friday and Elko Saturday.  They finish the regular season the following week hosting Truckee and Sparks.

Then comes the regional tournament.

“We just want to get better the next two weeks,” Miller said.