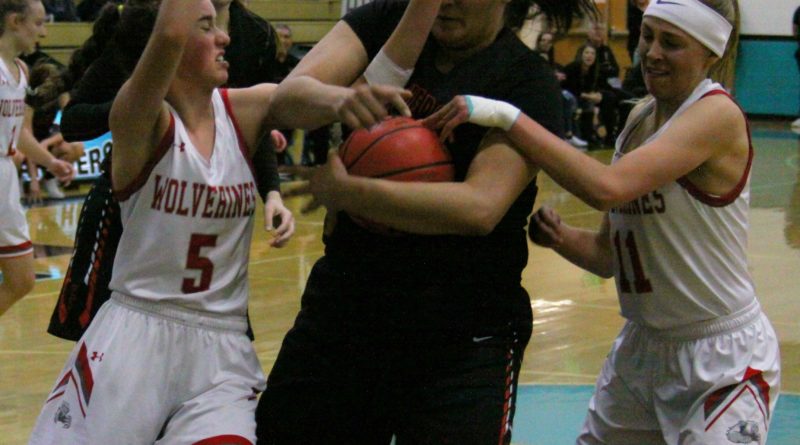 A big early lead evaporated quickly as the Fernley High School girls basketball team came up short one last time in last Thursday’s first round game at the 3A Northern League Tournament at North Valleys.

A quick-striking Truckee offense, and some cold Fernley shooting turned around an early 12-point lead as Truckee eliminated the Vaqueros from the postseason with a 55-46 win by beating the Vaqueros for the third time this season.

“That’s sports,” coach John Rogers said. “There’s a victor and a loser, and unfortunately they had our number this season.”

The Vaqueros opened the game strong defensively, holding the Wolverines to just five points over the first 10-plus minutes. A 3-pointer by Karli Burns put the Vaqueros up 11-5 heading to the second quarter, and when Ellie Kingston scored inside with 6:15 left in the first quarter, the Vaqueros led 17-5.

Soon, however, Truckee made adjustments offensively that gave its drivers openings to the basket and its shooters space on the perimeter, allowing the Wolverines to turn things around by closing the half with their own 17-5 run over the final 5:25 of the half.

“We knew that they would make a comeback,” Rogers said. “I mean, it was part of our pregame, we knew that if we jumped out on them, they weren’t going to give up. It was going to be a dogfight to the end, and give them credit, they made plays and we just went ice cold.”

The Vaqueros led just once in the second half, when Katelyn Bunyard opened the third-quarter scoring with a free throw with 7:25 left in the quarter to make it 23-22.

The Vaqueros managed to tie the game twice, at 25 on a basket by Burns with 6:54 left in the quarter, and at 27 on a basket by Jaiden Sullivan with 5:45 to go in the third.

“They had girls knocking in 3-pointers and getting to the basket uncontested, and we just kind of slipped there toward the end, and they made more shots,” Rogers said. “Bottom line, we didn’t make jumpers, we didn’t finish at the basket enough.”

Bunyard led the Vaqueros with 15 points, while Burns added 9 and Ellie Kingston scored 7.

“I thought that Ellie Kingston came on and did a nice job in extended minutes and I though Katelyn Bunyard really did good attacking the basket and getting to the free throw line, because that was one of our keys,” Rogers said.

With the loss, the Vaqueros ended the season with a 13-13 overall record, but most frustratingly, would up 0-9 against the four teams that finished ahead of them in the Northern 3A regular season standings.

“Obviously no one wants to go out like this,” Rogers said. “We thought we were going to be able to hold them n check and be able to pull this victory off.”