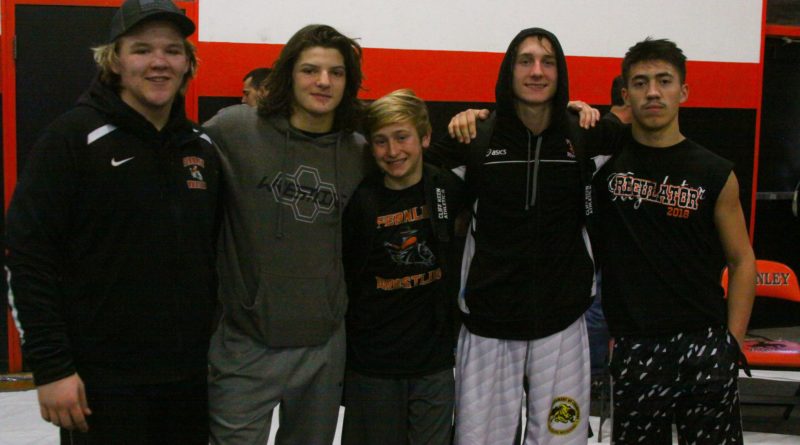 Piroddi won the 220-pound championship at the 3A North Region Championships held last Friday and Saturday in Fernley, while four teammates finished in the top four to punch their tickets to the State meet. The Vaqueros also had nine wrestlers who came one win short of qualifying.

Fernley finished fourth as a team with 144.5 total points. Spring Creek was the regional champion with 310 points, while Elko finished second with 179.5 points and Lowry was third with 165.

“This weekend was a rough one,” coach Ernie Garcia said. “We had some guys dig deep and find a way to get to state which was awesome to see.”

Piroddi finished his unbeaten run through the Divisional Duals and Regionals by pinning Elko’s Darin Legrand in 3:28 in the championship match.

“It’s indescribable,” Piroddi said. “It’s what I came here to do.”

It was Piroddi’s second consecutive regional championship, but he will enter this year’s State meet with a chip on his shoulder. He won his first match at State a year ago, then lost two in a row.

He said his mindset going into this week’s State meet is simple.

“Kick ass, and don’t take anything for granted,” he said,

As one of the most accomplished returners for this year’s Vaquero team, which features several freshmen and sophomores, Piroddi’s past accomplishments thrust him into a leadership role.

Jackson Chapin qualified for state with a third-place finish at 152 pounds, beating Brandon mariluch of Elko for third place.

“I think our youth really showed at regionals,” Garcia said. “For a lot of them it was their first regional tournament and we needed a little more fight out of them to push them through to state. The bright side is that they’re young and don’t realize what they’re capable of. Once they figure that out, we will be a scary team.”

Caulk and Carter Chapin are seniors who were returning state qualifiers, and both had beaten the fourth-place finishers in their weight classes this season.

“My heart hurts for our two seniors that were one win away,” Garcia said. “They are realistically top 10 guys in that state regardless of division. The North is just really tough and with the way the brackets shook out they both had to take the hardest routes to make it to state.”

The State meet will begin Friday at 3 p.m. at the Winnemucca Event Center, with Saturday’s action starting at 9 a.m.

Garcia said his goal for the State meet is to bring home five medals.

“We might have to beat some guys that we aren’t supposed to beat on paper, but they all have the ability to get it done,” Garcia said. “Setriano is in good position to win a state title as long as he wrestles like he normally does. I think we are going to surprise a lot of people with the guys we have going. We’ll be ready to put on a show.”