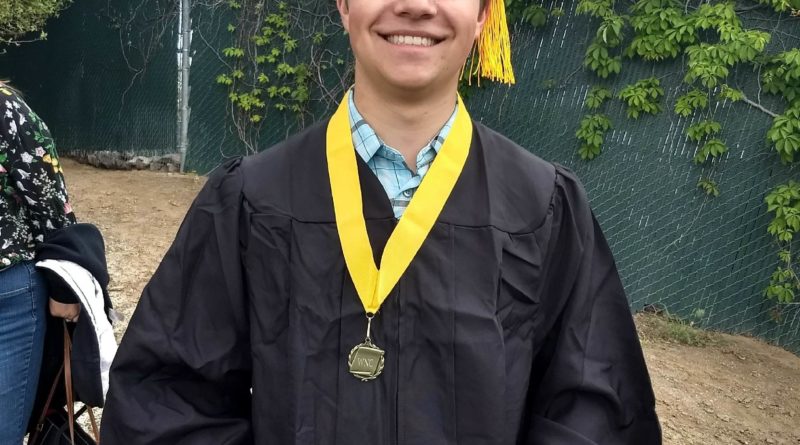 Two students with a nearly singular focus on academics headline the Fernley High School Class of 2018, which will receive their diplomas at the graduation ceremony at 7 p.m. Friday on the FHS football field.

Valedictorian Jordan Humes and Salutatorian Eric Wootton rank as the top two graduates in the Class of 2018.

Both Humes and Wooton are also graduates of the Western Nevada College Jump Start program, having received associates degrees during the WNC graduation ceremony May 21 in Carson City.

Humes and Wootton have both been awarded the Presidential Scholarship to the University of Nevada, Reno, and the Millennium Scholarship.

Jordan Ray Humes, the son of Elizabeth and Eric Humes, is graduating with a weighted grade point average of 5.1.

During his time at Fernley High School, Humes has been a member of the National Honor Society. He played basketball and golf for two years and soccer last year, before his academic obligations forced him to cut off his extracurricular activities. Humes took two science courses on the WNC Fallon campus in addition to his work at Fernley High School, and also led a WNC study group.

“My way of learning is by teaching others,” he said.

Humes performed a variety of community service projects through the National Honor Society and also worked as a volunteer in the nursery at his church.

Humes plans to attend the University of Nevada, Reno to pursue a Bachelor’s degree in biomedical engineering, with plans to go to medical school and eventually become a pediatrician.

He said he became interested in the medical field because his mother is a nurse and he chose pediatrics because he’s always liked and gotten along well with children.

He said becoming valedictorian was never a specific goal.

“I just always wanted good grades and that came with it,” he said.

Humes said the drive to do well academically came from his parents, and then he became self-motivated once he decided he wants to be a doctor. He said he received all A’s, until getting a B in a class last year that still irritates him.

“My parents always push me to get good grades and ever since middle school it’s been expected,” he said. “And knowing I need to have good grades for my goals as a doctor.”

Humes said his favorite classes at Fernley High were Honors chemistry and other science classes taught by Jody Ericksen.

One of Humes’ best, and worst, memories of his time at Fernley High are from the same event, the Homecoming lip sync contest during his freshman year, where he had to wear heels and a skirt as part of a skit. He also fondly remembers playing in a soccer game against Dayton, when, he said, “we actually had people come out to watch”, a JV basketball game his sophomore year when the Vaqueros won on a buzzer-beater against one of the tougher teams they played, and walking at WNC graduation May 21.

Asked what advice he would give to young students just entering high school, Humes said he would encourage students who plan to attend the University of Nevada to strive to enter the Jump Start program. He also said Fernley High has good programs who have a career track in mind, including their CAN and Career and Technical Educational programs.

“If you have a plan in that, try to focus on those,” Humes said.

The Class of 2018 chose not to have a graduating speaker, so the valedictorian and salutatorian speeches will be the keynote addresses.

“The main idea of my speech will be debunking that high school is the best four years of your life, and that your best days should never be in the past,” Humes said.

Eric Edward Yuuki Wootton, the son of Michael and Satomi Wootton, earned the title of Salutatorian by finishing second in his class with a weighted grade point average above 5.0.

Wootton played soccer for two years and competed in track for four years. He spent a year and a half in student leadership, including serving as sophomore class vice president.

Humes plans to attend the University of Nevada, Reno to earn a Bachelor’s degree in biology, then plans to go to medical school for anesthetics.

He said his initial interest in medicine came when his father told him to become an astrophysicist or anesthesiologist.

His desire to go into medicine also ties into the theme of the salutatorian address he is planning to make.

“My most recent idea is how we need to take care of each other as we go through life,” Wootton said. “I’ll talk about my grandparents, because the way I reacted to them becoming ill before they passed is not something I’m proud of.”

Wootton said his motivation to do well in school comes from his parents.

“It was kind of beat into me by my parents,” he said. “I know I need good grades to go where I want, but more so, my motivation is to make sure the people who put faith in me are not disappointed.”

Wootton said he entered his senior season ranked eighth in his class, and isn’t sure how he passed them all, especially since they were all in the Jump Start program as well, where classes carry greater weight.

He said his favorite classes at Fernley High were chemistry classes with Ms. Ericksen

“The way she taught worked for me, Wootton said. “She was thorough, and especially when I got to the AP test and a lot of material looked familiar and could answer questions with confidence.”

One thought on “Fernley valedictorian, salutatorian both aiming for medical careers”