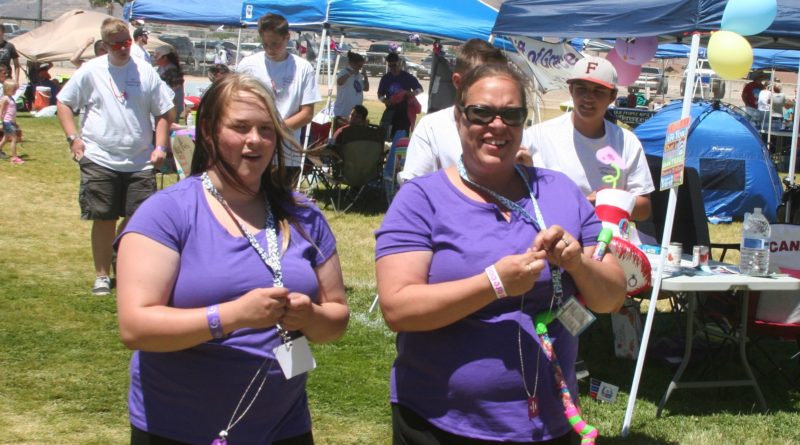 Alyssa Justice was 2 when she was diagnosed in January 2008 with T-cell acute lymphoblastic leukemia, and 5 when she died on Oct. 21, 2009.

Saturday, her mother Jamie and about three dozen friends and family members took part in the Fernley Relay for Life, in memory of the girl they called Bug.

Team Bug was one of 36 teams registered in this year’s relay, with 339 registered participants. The actual turnout was far greater, with friends and relatives of cancer survivors and those who have died walking to raise money for the American Cancer Society.

Event lead Marla Nichols said this year’s event has raised a total of $50,367.16 as of the end of the event Sunday morning, although the fundraising year continues to Aug. 31. The event had raised $38,589.16 before the relay, so the event itself generated $11,778.

Planning for the annual event starts in September, and teams can raise money throughout the year with activities like car washes, bake sales and raffles and through donations.

This year’s turnout included more than 90 registered survivors, the most the Fernley event has ever had, Nichols said.

See photos of this year’s Relay for Life here.

Jamie Justice said Team Bug formed and participated in their first Relay for Life in August 2008 after Alyssa’s diagnosis, and have continued to do it every year.

“We usually have 40 to 50 people that come and go within the 24 hours. mainly consisting of family and close friends,” Justice said.

Team King had about 30 family members and friends participating in memory of Jayme King, who died June 9, 2015 after three battles with cancer. A 2009 Fernley High School graduate, King was diagnosed in 2011 with Ewing’s sarcoma, a rare form of bone cancer that normally affects children and adolescents, in her knee.

Her sister Jordan participated in the walk while wearing Jayme’s University of Nevada softball uniform, and the family had many crocheted items, prizes that had been donated and quilts made by Gwen Thacker that were auctioned off to raise money.

Participants received beads for every mile they walked, and the event included games and other activities. At a candlelight Luminaria Ceremony, participants remembered loved ones lost to cancer, support people who currently have cancer, and honor those who fought cancer in the past.

“The luminaria video is sad, because there’s always more that have passed than survivors,” Justice said.

But while the reasons for participating may be somber, Justice said the event is also a celebration.

“Every team had a different reason for doing it, but you can’t be sappy the whole time, you’ve got to have fun, too,” she said.

2 thoughts on “Fernley Relay for Life raises more than $50K”