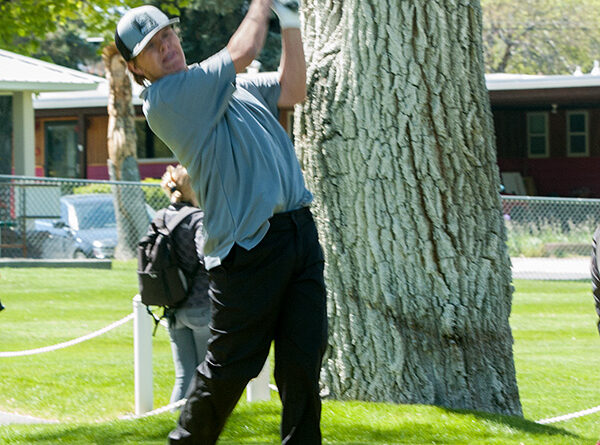 The Vaqueros finished second in Tuesday’s meet in Winnemucca, 13 strokes behind Spring Creek. Fernley’s Isaac O’Neill finished third overall with a score of 91.

The Vaqueros had won the previous two meets, with O’Neill finishing as the first medalist in both.

In the Parker Fox Memorial Tournament at Whitttell on April 29, the O’Neill shot a 79 to edge Elko’s Kaden Konakis by one stroke, while the Vaqueros finished 13 strokes ahead of Elko as a team.

The following week, May 4, the Vaqueros won their home meet with a team score of 348, four strokes better than Elko. Individually O’Neill shot a 74, the lowest score of the season in the 3A North East.

Freshmen Jacob Holmes and Noah Davis have been the team’s second and third scorers through the season, with Holmes posting a 90 and Davis shooting 92 in Fernley. The last three positions on each week’s lineup have been interchangeable, but coach Brian O’Neill said the players have been working hard to qualify for each event.

“The daily competition is definitely helping the boys in the tournaments,” Brian O’Neill said. “Overall, very happy with the desire to get better each day and willingness of the boys to put in the extra time.”

This week, O’Neill shot 91 to place third, while Holmes came in fifth at 93 and Davis shot 94 to tie for sixth. Cade Stanger was the fourth scorer this week with a 99.

The four combined for a team total of 377.

“Winnemucca is a tough course,” O’Neill said. “Kids learn a lot about game management and I think the scores reflect that.”

Through five league meets, the Vaqueros are in first place in the league with 22 cup points. The winning team in each meet collects six cup points, with the teams behind them earning points in descending order. With a five-point lead over Elko and Spring Creek, which each have 17, the Vaqueros will win the regular season league championship by placing fifth or better in next week’s meet.

Individually, with an average of 82.8, O’Neill also ranks first among the league’s players, and he also leads in individual points with 45. Spring Creek’s Kevin Thompson is second with an average score of 87.8 and 45 points.

Next week the Vaqueros will play in the last meet of the regular season at Ruby View Golf Course in Elko.