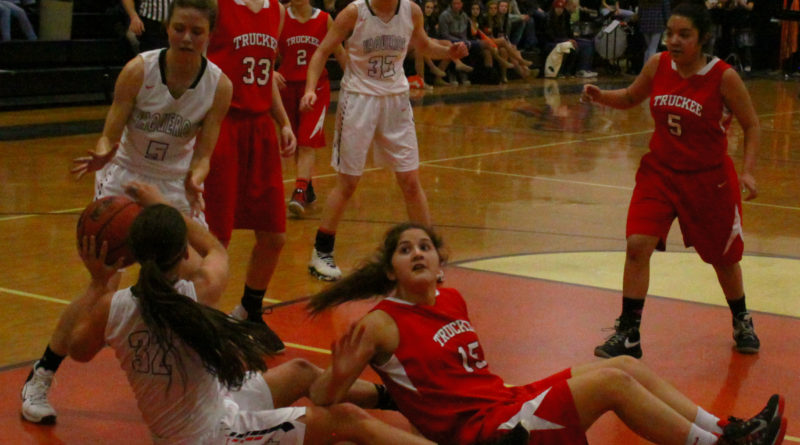 For most teams, the last week before heading into the playoffs is a chance for fine-tuning, or maybe adding a few new tricks to catch opponents off guard.

The Vaqueros were already without Brooke Chapin, who would likely have been a starter this season but tore her ACL during the soccer season, and Ellie Kingston, who injured her foot earlier this season.

That means the Vaqueros came into the final week of the season without two key contributors and two others who would have been.

Although Edgar is the team’s leading scorer and point guard, coach John Rogers said their absence is felt most acutely on the defensive end, where she usually plays the point of the team’s zone defense.

Her absence requires other players to be playing different positions in the zone, and after holding Truckee to 10 points in the first half and forcing a bevy of turnovers, the Vaqueros sometimes lost the high post in the second half, leading to several easy shots for Truckee in the second half, even though the Wolverines missed many of them.

“The areas you’re supposed to rotate to change completely,” Rogers said. “That’s on me, I kind of took for granted a little and that won’t happen again.”

Taylor Richardson stepped up offensively for the Vaqueros against Truckee, leading the team with 16 points. Celeste Condie added 8, Jaiden Sullivan scored 7 and both Ali Conder and Grace DeLeon had 6.

With the addition of freshman Katelyn Bunyard from the JV team, the Vaqueros now have three freshmen playing key roles as they close the regular season Friday night against Sparks.

Rogers didn’t know Tuesday night whether Gaitan or Edgar will be able to return for next week’s 3A North Region Tournament in Winnemucca. Edgar had an MRI on her foot and was still awaiting the results, and Gaitan is awaiting a diagnosis on her knee injury.

Fernley outscored Truckee 15-4 in the second half, making several steals and deflections out of their rotating zone defense that sometimes made it seem as if they had six defenders on the floor.

In the second half, however, Truckee began to feed the ball to the high post, who then passed to cutters or into the low post.

“We got a lot of steals and turnovers taking away certain aspects, but then Truckee did a good job of making adjustment and we didn’t,” Rogers said.

Rogers said he was happy overall with Tuesday’s performance, but he said the biggest emphasis before the region tournament will be to make sure everyone knows the defensive assignments of each spot in the zone so they can quickly rotate.

The Vaqueros will be attempting to nail down the No. 4 seed for the region tournament, which will be played next Thursday-Saturday in Winnemucca.