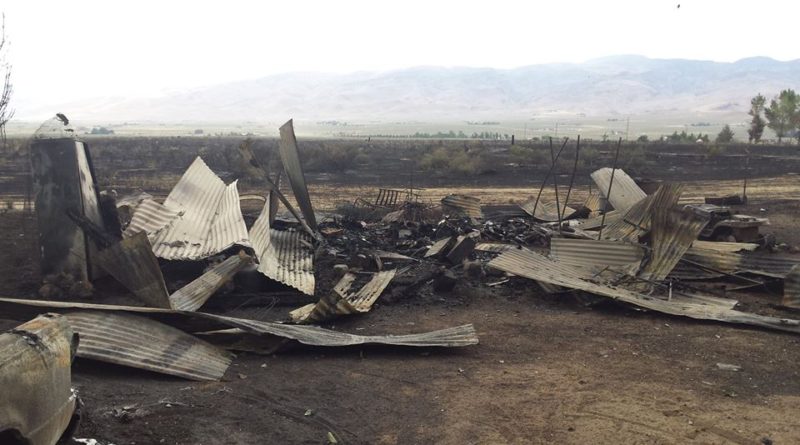 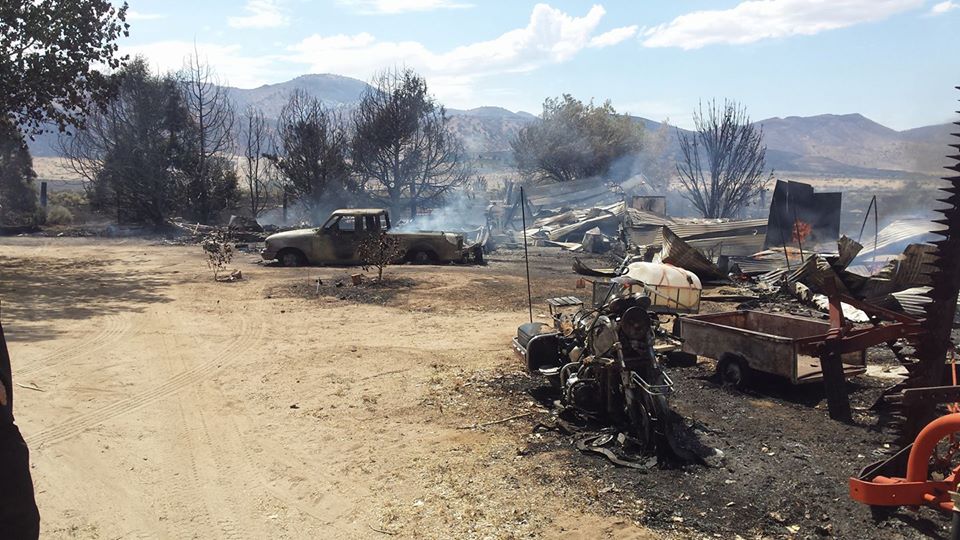 As he stood with his parents and brother watching his home and everything he owns burn to the ground, Arnold McGuire knew what was happening. But, standing a quarter of a mile away, somehow it didn’t seem real.

“It was like I was watching a movie,” McGuire said. “You could see it’s happening, but you’re one step removed.”

McGuire, who owns two businesses in Fernley –  Patriotic Tax, which he opened in December 2009, and Polished Salon, which he bought last year – and his parents, Ken and Sue, lost their homes in Palomino Valley to the Winnemucca Ranch fire on July 5. His brother’s house, also on the same property, was saved by a helicopter drop.

“The entire property is just scorched,” McGuire said. “No sage bush, no rabbit brush. All 40 acres are black. It’s surreal, just looking at it.”

The Winnemucca Ranch fire began July 4, about five miles from McGuire’s house off Pyramid Highway near Winnemucca Ranch Road. It burned 4,799 acres before being contained July 10. The cause of the fire has not been determined.

McGuire said he’d been up all night July 4 monitoring the fire, and laid down for a nap at noon July 5. Half an hour later, his mother ran in to tell him the fire was approaching and they had to leave.

“The fire was two miles up the hills west of my back door,” McGuire said. “About 12:30 my mom ran in screaming we have to go now.”

McGuire went to the back fence to look around the tree line and the fire was 30 feet out and moving fast. Within two minutes, the fire was already on the property. McGuire, his parents and brother retreated about a quarter mile down the road to the mail boxes, where they watched the fire rush their property and consume the two homes, which were about 75 yards apart.

“We had a 30-foot line cut and it jumped right over that,” McGuire said. “It went through so fast, all the cottonwoods around the house are singed. The apples are burned, but the tree is just singed.”

The McGuire family went to the Ironwood Equestrian Center, where an evacuation center was set up.

A couple of hours later, after the fire had passed through, McGuire and his brother were allowed to go back on their property. There, McGuire found everything he owns, but even more distressingly to him, everything his parents own, reduced to rubble.

“I lost everything I own, which is bad enough,” he said. “But my parents lost everything they own – wedding pictures, our baby pictures – things that can’t be replaced.”

The Red Cross put the family up for a night at the Atlantis. McGuire’s brother has an extra bedroom in his house, so their Ken and Sue returned to stay with him, while McGuire paid of pocket and spent two nights at a motel in Sparks.

He returned to the property Saturday night, the family’s first night together since the fire.

“We’ve got the power on, which means we have water,” McGuire said.

McGuire said his home wasn’t insured, but his parents’ was. He said his parents will use the insurance money to purchase a recreational vehicle to stay in on the property.

“My brother has a popup camper and I can stay in that as long as the weather is nice,” McGuire said.

McGuire described himself as lost for the first several days after the fire, crying one moment, laughing the next.

In one of those light moments, McGuire remembered that he hadn’t brought in a half-gallon of ice cream that he’d meant to bring to his trailer from a freezer in the barn.

“I still have a half gallon of chocolate chip mint ice cream because I was lazy and didn’t go up and get it,” he said.

And while trying to figure how to put his life back together, and how to help his parents do the same, McGuire found solace that at least their neighbors escaped unscathed.

“We will survive, but I’m just glad nobody else has to go through this,” he said.