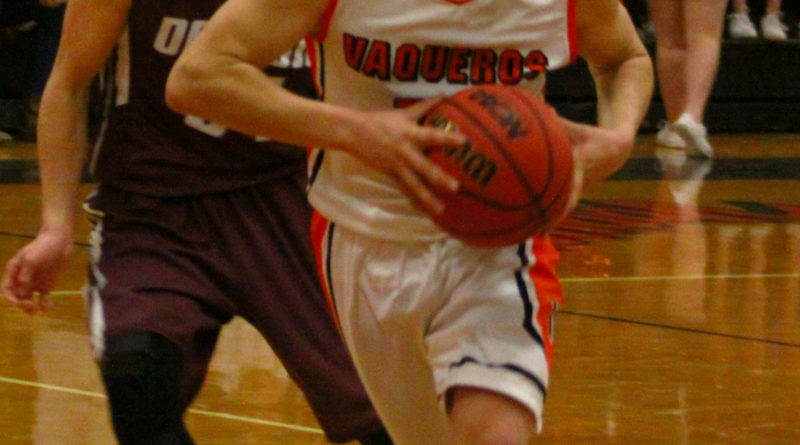 Fouls were adding up, Dayton was on a big run and had all the momentum and things seemed to be getting away from the Fernley boys basketball team late in the second quarter last Friday night.

But just when they looked to be in trouble, the Vaqueros responded.

Fernley outscored Dayton 13-3 to end the second quarter and doubled Dayton’s point total over the last 19 minutes of the game to win 71-48 last Friday night.

The win brought the Vaqueros back to 2-2 in league play and 5-3 overall, getting back on track after a disappointing loss to Fallon three nights earlier.

“Big win for us,” coach Derek Miller said. “We needed it.”

After being upset with the Vaqueros’ performance against Fallon, Miller was in much better spirits after the Vaqueros dominated Dayton in the second half.

To that point, however, things weren’t looking so rosy.

Dayton used a 17-5 run to tie the game at 25 with 3:06 left in the game, on a free throw by Jonathan Ply. Just moments earlier, Ply had sent the Dayton students into a frenzy with a dunk on a fast break that cut Fernley’s lead to 1.

At that point, the Vaqueros had four players with two fouls, and their fullcourt press was suffering. Miller decided to pull out of the press and fall back into a zone, and the game turned.

“They came back in that stretch and got some easy ones,” Miller said.

Fernley went on to score the next 10 points and Drake Howe hit a 3-pointer at the halftime buzzer for a 38-28 lead.

Russ Ortiz then made sure the Vaqueros didn’t lose the momentum, scoring Fernley’s first 8 points of the third quarter, when Fernley got its lead up to as much as 16.

“Russ Ortiz, I’m proud of him, he carried us in second half,” Miller said. “He was a little off Tuesday, so I knew he’d respond.”

Dayton played a box-and-one defense, guarding Zach Burns man-to-man with the other four players in a zone, and Miller said Fernley’s patience against that scheme was the difference.

“We tried to make a big effort to get the ball inside more,” he said. “We have a tendency to want to shoot off the dribble and not go in and out, but we’re better at catch and shoot.”

Howe led the Vaqueros with 15 points, while Ortiz scored 13, Ren Arroyo had 12 and Burns scored 11.

The Vaqueros play once this week, at Yerington on Thursday, before playing Dec. 26-29 in the Rail City Classic in Sparks. They open that tournament against Reed.

“We’ve got to still be better defensively,” Miller said. “We were pressing pretty well but we started to get into foul trouble. We’ve still got to get in better condition and just sew some things up.”