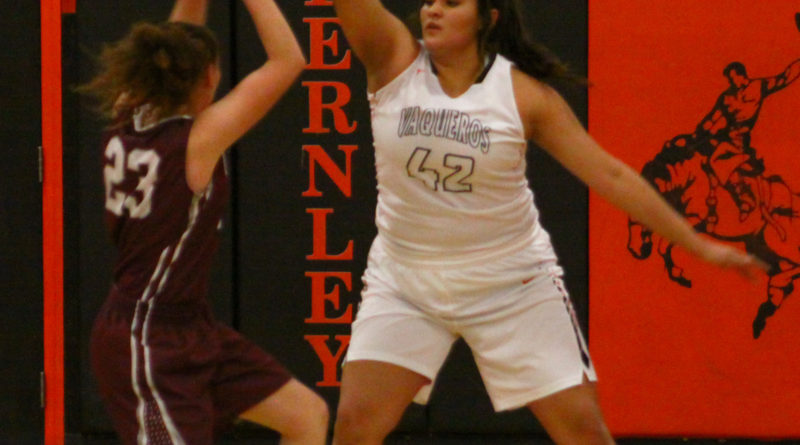 With a 54-34 win over Dayton Friday night, the Fernley High School girls basketball team assured itself that it will enter 2017 with an even league record.

The Vaqueros are now in the midst of a busy nonleague schedule through the holidays in which they plan to work on weaknesses they have identified and prepare for the resumption of league play in January.

The Vaqueros are playing at Douglas tonight, and go to Yerington Thursday night.

Next week they will play in the Gator Winter Classic at Green Valley in Henderson.

The Vaqueros evened their league record at 2-2 and moved to 3-4 overall by beating Dayton, but coach John Rogers said even in the win, they showed they still have improvements to make.

The Vaqueros played like a team hungry for a win in the first half, jumping to a 12-3 lead in the first 3:06 of the game.

But they didn’t score again in the first quarter, and had another four-minute drought to start the second half. Rogers has bemoaned the Vaqueros’ propensity this season to go through prolonged periods without scoring.

“Teams like Lowry and Fallon can go through those periods because the other 28 or 29 minutes, they play lights out,” he said.

While Dayton never made a run to cut into the Vaqueros’ margin, Fernley likewise never pulled away to deliver a knockout blow.

“Dayton got as close as six in the second quarter, at 14-8, and within seven in the third quarter at 30-23, before Fernley scored 12 consecutive points to stretch the lead back to 42-23. But Rogers said the Vaqueros occasionally lost track of shooters, particularly Elora Neep, who made three 3-pointers and led Dayton with 13 points.

“We’re supposed to be a defense oriented team, and we can’t make little mistakes like that,” Rogers said. “We talk a lot about the mistakes we make as a team are correctable. It’s time to correct them.”

Hailee Edgar and Grace DeLeon each scored 11 points to lead Fernley, Taylor Richardson scored 8 and Brittney Gaitan had 7 as nine Fernley players scored in the game.

“I think we’re getting better as a whole, shooting the ball, even from the first start of the year,” Rogers said.

At Green Valley, the Vaqueros will open the tournament at 10:15 a.m. Dec. 27 against Boulder City, then face Flagstaff (Ariz.) at 8:15 that night. On Dec. 28, they will face Dimond (Anchorage, Ak.), then be bracketed for the rest of the tournament based on the first three results.

Rogers expects the Vaqueros to face tough competition in the tournament, and in the games at Douglas and Yerington, but he said he’s happy to face opponents they don’t know, so they can focus specifically on their own play and not on specific game plans for the opponents.

“These are huge games to fix our mistakes,” Rogers said. “We’re going to grow so much over the next two to three weeks that when we come back after Christmas you’re going to see a more polished, well-rounded team.”