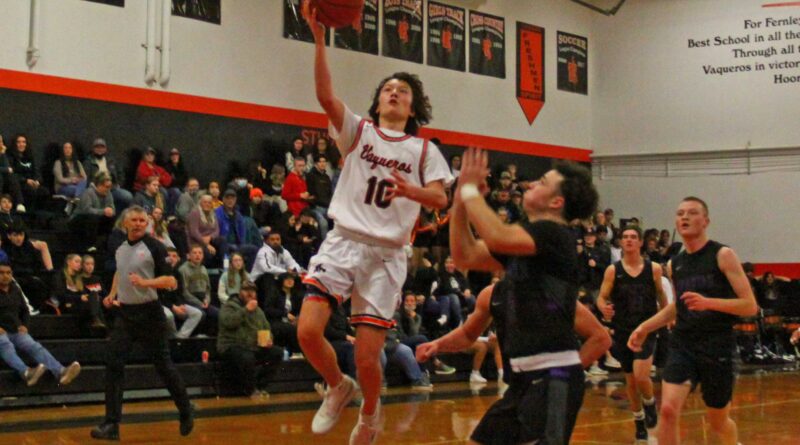 Despite playing shorthanded, the Fernley High School boys basketball team used a strong defensive effort to pick up a big road win in Fallon last Wednesday. The were unable to muster the same result in another road outing at Lowry last Saturday, and had to settle of a split of a pair of games against Northern 3A East Division foes.

The Vaqueros held Fallon to just 13 points in the second half, to turn a five-point halftime deficit into a 54-46 win, despite missing one starter and with another not at full strength.

“It was a great team win with different kids stepping up and contributing,” coach Derek Miller said. “I thought that we had one of our best defensive efforts of the year.”

Caudle had 18 points and Carson Kingston scored 17 against Lowry, but the Vaqueros made just six of 14 free throws, while Lowry hit 23 of 34.

“Our defensive effort did not match our last game,” Miller said. “I thought that we struggled keeping them in front of us and had a lot of reaching fouls called. They spent a majorly of the game at the foul line and were able to knock them down.”

Miller said the Vaqueros also had many opportunities to get a win down the stretch but couldn’t pull out.

The Vaqueros are scheduled to host Dayton Wednesday at 7:30 p.m. Fernley is also scheduled to play at North Valleys Friday, but North Valleys switched to distance learning for Wednesday and Thursday because of a high number of staff illnesses, and it is uncertain whether the school will resume in-person classes and extracurricular activities by Friday.

“I am looking forward to hopefully getting my whole team back and healthy as we move on,” Miller said.