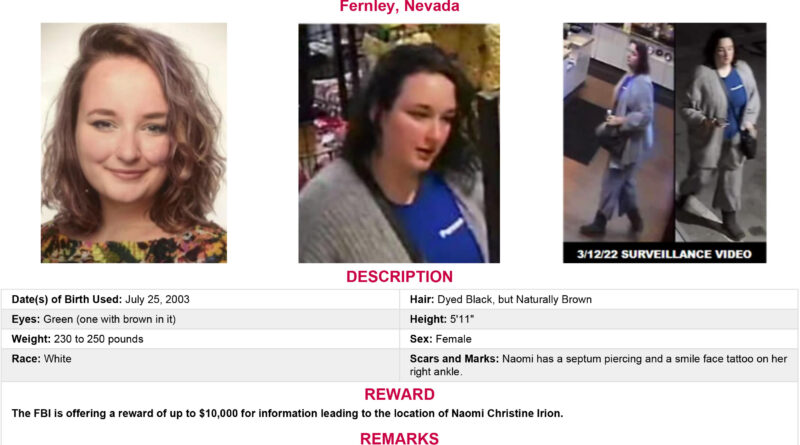 The FBI announced Monday it is offering a reward of up to $10,000 for information leading to the location of Naomi Christine Irion, who was abducted from the Walmart parking lot in Fernley March 12.

Irion was kidnapped by a man who forced his way into her car at 5:24 a.m. as she was waiting in the parking lot for a shuttle bus to her job at Panasonic in the Tahoe Reno Industrial Center between Fernley and Sparks. Her car was found March 15 next to the Sherwin-Williams Western Emulsion Plant.

On Friday, Lyon County Sheriff’s Office arrested Troy Driver, 41, of Fallon, on charges of kidnapping, and deputies from LCSO, the Churchill County Sheriff’s Office and agents from the FBI served a search warrant on a home on Alcorn Road in Fallon, where the impounded a pickup truck they said the suspect had been driving. Driver is scheduled to appear for arraignment Wednesday in Canal Township Justice Court in Fernley, where he will appear via video from the Lyon County Jail in Yerington, where he is being held.

Irion, 18, is 5’11”, 230 to 250 pounds, with naturally brown hair that is dyed black. She has green eyes, one with brown in it, she has a septum piercing as well as piercings in both nostrils and a smiley face tattoo on her right ankle. She was last seen wearing a blue Panasonic company shirt, a gray cardigan sweater, gray pants, and brown boots. She was carrying a black purse. Her iPhone (10 or 11) has yet to be found. She was also believed to be carrying ear pods and was known to carry a fidget spinner.

Surveillance video from Walmart released by LCSO shows the suspect lurking in the parking lot and watching the area where Irion’s car was parked. Irion’s family members say additional video shows the man walking around Irion’s car and forcing her to move from the driver’s seat to the passenger’s seat, then driving away in her car.

LCSO has not released information about what it has found in any of its searches, or what evidence it found in her car.

One thought on “FBI offers $10,000 reward for information in locating Naomi Irion”