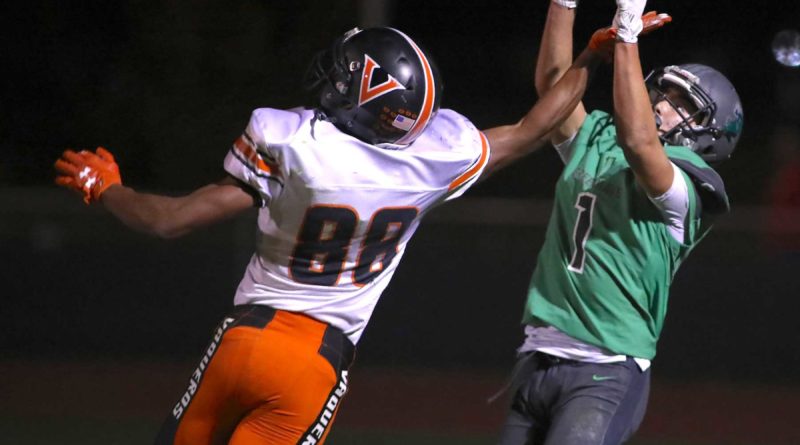 When the dust settled last Friday night and there was nothing left to do but deal with the emotions of a season-ending playoff loss to Fallon, it was the bigger picture that was foremost on the mind of coach Chris Ward, and in the message he has for the Fernley High School football team.

The Vaqueros ended their season with a 54-13 loss to Fallon in the Northern 3A semifinals, and though there were few dry eyes emerging from the team’s postgame huddle, Ward said his team should still hold their heads up.

“They gave it a good effort and it wasn’t like they just laid over and let them have their way,” Ward said. “They got a couple of those touchdowns, man, we were actually in pretty good position, but they just make a couple tremendous catches.”

Fallon asserted its dominance with 38 consecutive points to blow the game open, almost all on big plays.

“That’s a good team right there. I think it might be his best team, even better than that team over there,” Ward said, pointing to where members of the Greenwave’s 2013 state championship team were congregated.

Ward thinks so highly of Fallon that before the game, he told the Vaqueros that if they were good enough to come into Fallon and win, they’d be good enough to beat anybody left in the playoffs.

The scoreboard reflected every bit of the explosiveness the Greenwave showed all night.

Fallon’s first three touchdowns came from 61, 56 and 52, and so explosive were the Greenwave, that Fallon’s seven touchdowns accounted for 266 of its 422 total yards.

The first came on Fallon’s first offensive play when after forcing a Fernley three-and-out, quarterback Elijah Jackson ran 61 yards for a score and an 8-0 lead.

The Greenwave’s second offensive play was a 56-yard touchdown run by Sean McCormick to make it 16-0.

“They threw two haymakers at us right at the get-go,” Ward said.

But the Vaqueros responded with two of their own. First, A.J. Kuha took a toss sweep around right end for a 60-yard score, cutting the lead to 16-6 when the extra point was missed. Next time the Vaqueros got the ball, Miles Steele and Junior Halterman connected on an 80-yard touchdown pass to pull within 16-13.

“It was good to get a couple touchdowns on those guys,” Ward said.

But outside those two plays, Fernley managed only 137 more yards and never got beyond the Fallon 45-yard line.

The Greenwave, meanwhile, broke off big play after big play. Jackson hit Brock Richardson for a 52-yard score that made it 24-13 with 4:32 left in the second quarter, and then, just to show they could drive the ball methodically as well as explosively, Fallon drove 56 yards in seven plays for a 30-13 lead on a halfback pass from Sean McCormick to his brother Tommy with 18.1 seconds left in the half.

Jackson hit Tommy McCormick with a 40-yard scoring pass to start the third quarter, then found Richardson for a 22-yarder that Richardson took off the fingertips of Fernley’s Marcus Young to make it 46-13.

Jackson and Tommy McCormick wrapped up the scoring with a 24-yard connection with 5:45 left in the game.

“I think we just wanted them to have a season they could be proud of, and I think they can be,” he said. “The way they bounced back and were able to get some wins, I think they had a good season. I’m very proud of our guys, because a lot of people might have wrote us off at the beginning of this year starting off 0-3, and to come back and get seven wins, and maybe should have had eight, they had a good year. Got into the playoffs, won a game in the playoffs, got into the second round, so yeah, they did good.”