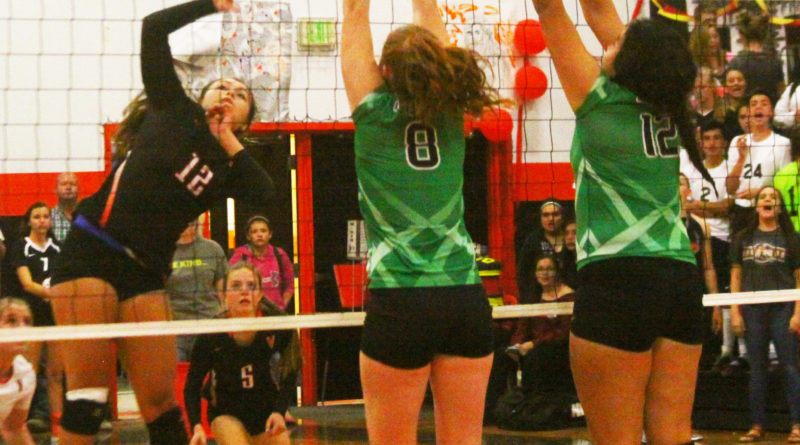 Playing well in the first set has become the norm for the Fernley volleyball team this season. Sustaining that level has been a problem, and it was again Wednesday as Fallon defeated the Vaqueros in three sets, 25-20, 25-19, 25-11.

For Fallon, coach Patty Daum said it was a matter of weather Fernley’s early emotion, and then finishing strong.

“It’s always tough to play here in Fernley, and we knew it was there Homecoming,” Daum said. “Those kids come ready to play and first set they played real well.”

It was at the net that Fallon took control of the game, but not necessarily with hitting.

Whitney Skabelund led the Greenwave with 7 kills, but the Greenwave had 24 blocks, led by 8 solo blocks and 13 total by LeAnn Stands.

“We worked Monday on this game specifically and it worked well for us tonight,” Daum said.

Fernley coach Kiara Stone said she has seen steady improvement from her team over the past year, but hasn’t been able to get over the hump in close games, like the first two sets against Fallon.

“We just can’t finish,” Stone said. “We get timid at the end and do that whole play not to lose thing.”

The Vaqueros won Monday’s nonleague match at Lovelock, 25-12, 25-12, 26-24, but even in victory, faded in the third set. Stone said that will be a point of emphasis for the Vaqueros the rest of the season, but she said much of it may be a lack of confidence.

“I’m excited for the second round (of the league schedule) because I think the girls will play with more confidence when they see the same teams for the second time,” Stone said.