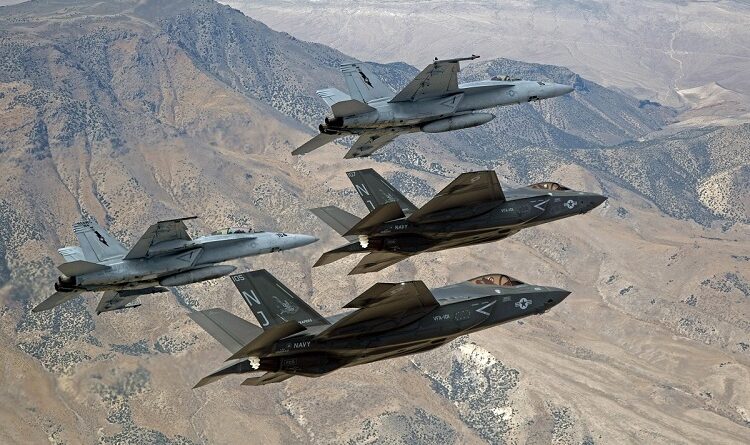 Congressman Mark Amodei announced Thursday that the Fallon Range Training Complex expansion and modernization has passed the House version of the Fiscal Year 2023 National Defense Authorization Act, which was overwhelmingly approved in a bicameral-negotiated update to the bill Thursday morning, December 8.

The FRTC provisions and most final agreements came after the Senate worked through negotiations between the House and Senate committees. The final Senate vote is expected in the next few days. Once the Senate passes the action, the approved NDAA would go to President Biden for his signature.

Community leadership is pleased with the resolution after nearly seven years of negotiations on the FRTC modernization effort, which will offset land losses to the local community while supporting the U.S. military. The original expansion proposal was first introduced to Fallon residents in October 2016 by then NAS Fallon Commanding Officer, David Halloran.

“Rep. Amodei has supported the City of Fallon and other local stakeholders tirelessly to ensure that our voices were heard, and our priorities included, since Day 1 of the Navy’s proposal,” said Mayor Ken Tedford. “Were it not for Rep. Amodei’s efforts, this monumental legislation would not have been possible. He is a true champion for Nevada.”

Press releases from the Nevada congressional delegation explained the agreement will provide NAS Fallon with an additional 558,535 acres for military training vital to national security. Some of the lands will remain under the Department of Interior’s oversight to facilitate other regional land management interests. The legislation designates over 581,887 acres of conservation, wilderness areas, and other protected areas, and holds a total of 18,170 acres of land in trust for the Walker River Paiute and Fallon Paiute Shoshone tribes.

The bill transfers $20 million to the Walker River Paiute Tribe in recognition of the historical contamination of their tribal lands and $20 million to the FPST to create a new cultural center to sustain the knowledge, culture, and language of the Fallon Paiute Shoshone tribe. The agreement will also allow Churchill and Lander counties to access land for economic growth.

“A large swath of this land in Dixie Valley will remain under the control of the Department of Interior,” Amodei said.

According to Churchill County Manager Jim Barbee, the county and its partners have been working with the congressional delegation as the proposed range expansion made its way through the various congressional committees. He said provisions for Dixie Valley received input from both tribal and county governments. Barbee said Dixie Valley will not be withdrawn as requested by the Navy. The area will be under BLM management which will consult with the Navy, county, Tribal groups, and cattle grazers for implementation that allows “dark sky training” for the Navy. The area will remain open to the public.

The U.S. Fish and Wildlife Service last week listed the Dixie Valley toad as an endangered species. The toad has been at the center of a legal battle with Ormat over their geothermal power project. “It is my understanding the toad area is outside the special management area,” Barbee added. “The easements for the future water line and well development as well as Green Link are included in the language.”

In addition, the community will benefit from land closer to Fallon for economic development purposes.

“We received 14,000 acres in direct conveyance for municipal and economic development and 7,000 acres for public purpose,” Barbee said.

The public purpose projects could include land for a gravel pit, for example, or to expand the landfill area 18 miles south of Fallon. Barbee said the commissioners are looking at trading some of the lands that border the 40-mile desert in northern Churchill County. The land is in the Fallon National Wildlife Refuge and extends into the Navy’s Bravo Range 20 withdrawal.

Barbee said a checkerboard resolution has been created in the northwest portion of the county to facilitate land swaps and direct conveyances for creating larger federal blocks of land and larger blocks of private lands that can be developed. Funding is a result of the county’s new membership in the Southern Nevada Public Lands Management Act fund (SNPLMA Fund)
Barbee said the Navy is committed to rerouting Pole Line Road, the alternate Sand Canyon Road, and Nevada State Highway 361 outside of the withdrawal areas.

The county will also receive $20 million to offset the land conveyance. Barbee said the money will help offset the funding for a new courthouse.

In 2021, Congress renewed the current FRTC withdrawn lands that consist of more than 234,124 acres of land within the training areas Bravo-16, southwest of Fallon, Bravo-17 east near Fairview Peak, Bravo-19, 30 miles south of town off U.S. Highway 95, Bravo-20, northeast of Fallon, and the Dixie Valley and Shoal Site training areas. The land was permanently withdrawn in 1953 through Public Land Order 898.

The proposed bill also includes three new wilderness areas: Clan Alpine, Agusta, and Desatoya which were formerly Wilderness Study Areas. Barbee said the 70-mile-long Stillwater Range east of Fallon, which is a wilderness study area, is being replaced with the Numunaa Nobe National Conservation Area which will allow more flexible access than wilderness. Grimes Point will also be placed within the conservation area.

Capt. Shane Tanner, commanding officer of NAS Fallon, said the need to modernize the FRTC has never been more urgent. “Naval Air Station Fallon remains committed to working with all stakeholders as we implement congressional legislation over the next several years,” Tanner said.

Tanner, who became commanding officer in March, said he appreciates the support and cooperation among all the stakeholders that have been involved with the FRTC expansion.
Earlier this year, Carlos Del Toro, Secretary of the Navy, visited NAS Fallon and met with community leaders. He said this piece of critical legislation will enhance the nation’s security by allowing the Navy’s carrier air wings and special warfare teams to train in a more realistic environment.

One hundred percent of all naval aviation and naval special warfare units train on Fallon ranges before deployment. Advanced weaponry and more air space are needed to launch missiles toward their targets. The expansion of Bravo-16 will give the SEALs (Sea, Air, and Land) Teams the ability to conduct more realistic worldwide training.

Churchill County Commission Chairman Pete Olsen and Fallon Mayor Ken Tedford said the stakeholders in the expansion talks stood and worked together and created what Olsen called an “exciting” plan for the future.

“When this bill becomes law, we will commence a new chapter focused on ensuring that Congressional intent translates into real-world progress,” said Olsen in a press release. “Churchill County looks forward to continuing its strong relationship with the Navy in support of their important mission and partnering with Nevada’s congressional delegation to ensure the administration’s implementation accounts for the realities of day-to-day life in Northern Nevada.”

Amber Torres, chairwoman of the Walker River Paiute Tribe, addressed the contamination of tribal lands and said an injustice has been resolved. “We can now begin the healing process, with restored sacred lands, expansion of our tribal homeland, just compensation, and the opportunity for new economic development for the benefit of our people,” Torres said. “This landmark legislative settlement marks a new day for the Walker River Paiute Tribe and our friends and neighbors in the great state of Nevada.”

Tedford said their voices were heard and their views represented in this legislation. “We know many parties’ interests were involved but as always, Senator Cortez Masto was masterful in bringing those many different interests together to reach a solution that both addresses national security and respects local interests,” Tedford said. “We’re grateful for the collaboration from the entire Nevada delegation to move this proposal forward.”

Cortez Masto said the expansion of the Navy’s Fallon Range Training Complex will improve national security, fuel economic growth in Churchill County, and preserve important cultural heritage sites for Tribal nations. “I worked closely with Senator Rosen and Congressman Amodei, the administration, Senate Armed Services Committee, congressional leadership, and all local stakeholders to secure this agreement and will make sure it is in the final NDAA,” Cortez Masto said.

The range expansion and the NDAA will be discussed in more detail at the December 21 Churchill County commission meeting, which begins at 1:15 p.m. in the commission chambers.