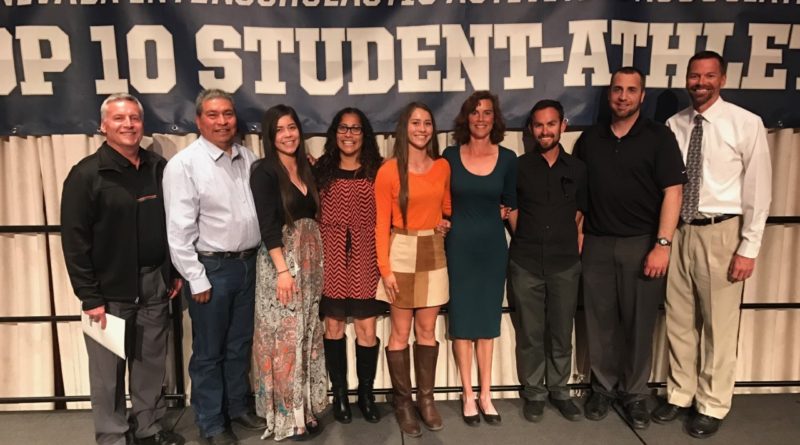 With 12 varsity letters in her illustrious high school career and a scholarship to run cross country and track at St. Mary’s University, Grace DeLeon is one of the most decorated athletes in Fernley High School history.

Last month, she was also honored of one of the Top 10 Student-Athletes in Northern Nevada by the Nevada Interscholastic Activities Association.

DeLeon and the other winners were honored at a banquet April 26 at the Peppermill Resort in Reno.

The Top Ten Student-Athletes of the Year award is given to not just the top high school athletes in the Silver State, but to those student-athletes who exemplify total school and community involvement. Special consideration in the selection process is given to student-athletes who participated in multiple sports, other school and student government activities, and community service projects while at the same time maintained a high academic status within their school.

“This is an outstanding event which recognizes student-athletes who exemplify what high school activities and athletics are all about,” says Mr. Bart Thompson, Executive Director of the Nevada Interscholastic Activities Association. “While the requirements sound restrictive, we know these student-athletes exist as evident by the group of individuals we have with us tonight. It is our goal through the Top Ten program to find and honor these superb individuals.”

DeLeon has earned four varsity letters in cross country, basketball and track, has been involved in student leadership as class president in three of her four years at Fernley and will graduate as the Valedictorian of the Class of 2017.

“Coming from a small town and a small school, people put limits on you,” DeLeon said. “I’m proud to say I’m one of the best student-athletes in the state, not just in my school and my division.”

To be eligible for the award, all candidates must be seniors. The general categories include scholastic achievement (class rank, non-weighted grade point average, number of semesters on the honor roll, number of honors classes taken, and ACT and SAT scores), overall sports participation (number of varsity sports, number of varsity letters, and individual and team achievements), other contributions (school and church activities, and community service accomplishments), an essay, and letters of recommendation. The Top Ten Student-Athletes of the Year in both Northern Nevada and Southern Nevada, as selected by a panel of judges, are then honored with a formal dinner banquet.

“I feel I’ve represented Fernley High School well and proven that even if I’m from a small town I can compete with the kids in the big cities,” DeLeon said.