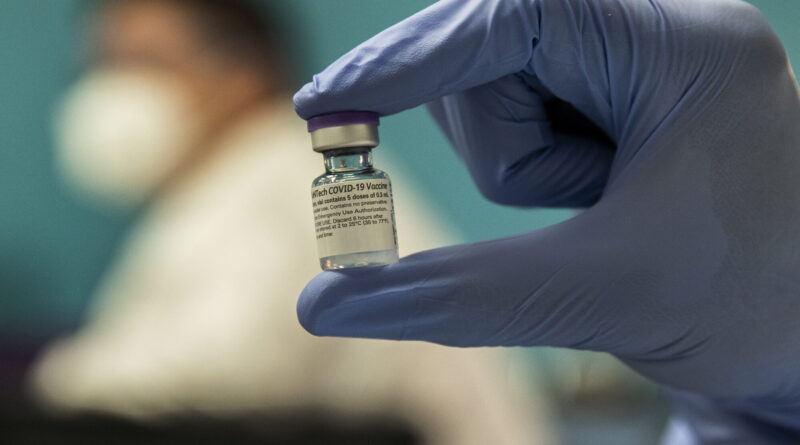 Several rural counties across Nevada have started offering the COVID-19 vaccine to school employees, spurring hope among educators amid the pandemic.

Carson City Health and Human Services started providing the vaccine Wednesday to interested staff members from school districts in Carson City, Douglas County, Lyon County and Storey County as well as private schools, said Jessica Rapp, the agency’s spokeswoman. She said the health department, which serves the Quad County region, received clearance from the state immunization program to begin vaccinating school employees based off of a variety of factors, such as its vaccine inventory and appointment availability.

School employees were included in the agency’s 600 appointments Wednesday, though Rapp didn’t know the exact number. The appointments also included people such as health care workers and law enforcement officials who fall under Tier 1 of the state’s vaccination plan.

Douglas County School District Superintendent Keith Lewis was among those scheduled to receive a vaccination on Wednesday. The school district has roughly 900 employees — closer to 1,200 with substitute teachers and coaches — and all are free to schedule appointments. Lewis said the district is being flexible with employees trying to find appointment times, though he acknowledged not everyone is keen on getting the vaccine.

“Of course we can’t make it mandatory,” he said, adding that it’s welcome news for those who do want it. “I definitely believe there is that feeling of relief.”

David Jensen, superintendent of the Humboldt County School District, echoed that sentiment. Some Humboldt school employees began receiving the vaccination as early as Dec. 18 when the county found itself with extra doses available, he said. Roughly 140 district employees have expressed interest in the vaccine, and, of those, about 80 people have either received the vaccine or scheduled an appointment.

Since the beginning of the pandemic, 58 staff members and 60 students within the Humboldt County School District have recovered from COVID-19. Two more staff members and one student recently tested positive for the virus, according to the district’s weekly update posted Tuesday.

(It’s important to note those cases aren’t necessarily linked to the school environment. Humboldt County, home to roughly 16,800 residents, has at times had one of the highest per-capita case numbers in the state.)

“It has been phenomenal that we could offer this to our employees,” Jensen said. “The appreciation I’ve heard from our employees is just astounding.”

School employees in White Pine County have started receiving the COVID-19 vaccine as well, Superintendent Adam Young said. All employees can sign up if they desire.

“The public health nurse is making her way down the signup list one at a time,” Young wrote in a text message.

The Washoe County School District, in turn, sent staff an email Wednesday describing an initial plan for vaccinations. The 8,000-employee district has been surveying staff and working on a ranking order for how to deploy the vaccine. The entire plan hasn’t been finalized — partially because the employee survey remained open until 11 p.m. Wednesday — but district officials worked with unions and determined the first employees who will be eligible:

That third category includes a broad segment — for instance, staff at alternative schools as well as Marvin Picollo School, which serves students with developmental or severe medical issues. Additionally, employees in early childhood, truancy and re-engagement, and certain special-education programs will be first in line, along with staff members who work in the district’s central kitchen or make home health visits.

The Washoe County School District estimates the first group contains 1,000 employees, although the vaccinations will be staggered over more than one day, said Megan Downs, the district’s communications manager. The district plans to release more information about its scheduling plan next week.

The survey results so far, however, signal strong interest in the vaccine among employees, Downs said. About 500 employees even noted they would be willing to serve as volunteers helping with logistical needs during the vaccination process.

“I feel like that’s a good indicator that there’s a lot of interest,” she said.

Plans for school employees in Southern Nevada remain under discussion. The Clark County School District alone has more than 42,000 employees — more than five times as many as the Reno-area district.

Southern Nevada health authorities emphasized that point during their own media briefing Wednesday.

“The Tier 2 group is big, and we’re looking at really doing some large-scale pods for them,” said JoAnn Rupiper, director of clinical services for the Southern Nevada Health District. “Now, as far as Washoe County being further along, of course they are because they have less people.”

Vaccinations are seen as a key part of ensuring schools reopen and remain that way, which is why educators have been lumped into the second tier in many places across the country. The Clark County School District is one of the nation’s largest districts that hasn’t welcomed students back, in some form or fashion, to physical classrooms. Other Nevada school districts, however, have resumed in-person instruction.

Shortly before the holiday break, the Clark County School District reached an agreement with the Clark County Education Association — the bargaining unit for teachers — about a reopening plan. The proposal calls for a phased approach to reopening, with the youngest students returning first. But no timeline for doing so has been established.

The Clark County School Board of Trustees are expected to review the agreement at a Jan. 14 meeting.