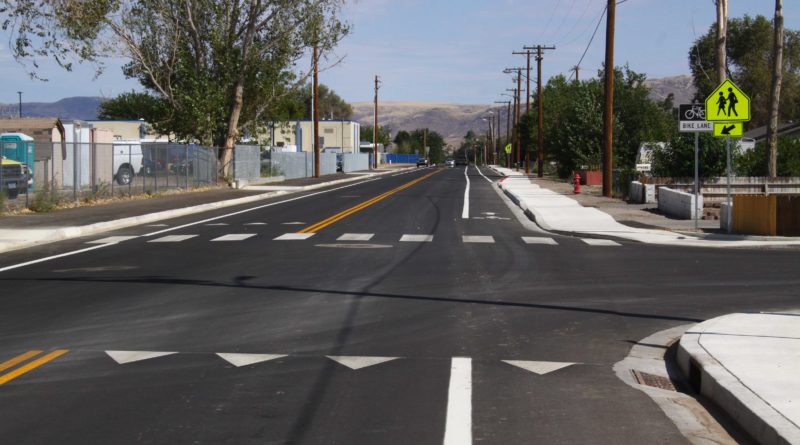 After the festivities ended last Thursday to celebrate the completion of the Hardie Lane reconstruction project, Mayor Roy Edgington was presented with a piece of the old underground water main. The piece of pipe, made of two rounded out halves of a redwood log, wrapped with a thick wire to keep it from disintegrating, had been installed more than 100 years ago.

That pipe serves as a perfect metaphor for the project. While the repaving project doesn’t quite hearken back to the days of wagon trains, it might seem so for the people who have worked on the project for the last nine years, and even more so for the residents who used the road that was nearly as rough as a wagon trail.

The project began in 2010 with the city’s first grant application to the Nevada Department of Transportation, and it was about that time that then-city engineer Shari Whalen approached the Lyon County School Board about joining forces on the project, which included repaving of the school’s parking lot and other improvements on school district property.

But it wasn’t until 2013 that the city got the Notice to Proceed with design for the project. That was followed by five years of red tape, including environmental clearances, environmental acquisitions, easement acquisitions “and just everything you have to do to get federal money to spend in your community,” said current city engineer Derek Starkey.

The project extended from Main St. to Cottonwood Ln. and included a complete roadway reconstruction, construction of curbs and gutters along both sides of the roadway, installation of a storm drain system, water and sewer main replacement, safety improvements including traffic calming measures around Fernley Elementary School and the piping of a Truckee-Carson Irrigation District ditch.

The city contracted with A&K Earthmovers last fall and construction finally began, after years of complaints by city residents and frustration by city officials over how arduous the process was.

“Everybody wants a street like this,” Mayor Roy Edgington said.

Because Fernley Elementary School is served by only one bus, most of its 500 students, ranging from 3-year olds in pre-K to 10-year old fourth graders, are either dropped off, walk, or ride bicycles or scooters to school.

“How excited we are to have this for safety,” FES principal Chanen Cross said. “It’s a huge benefit for our families and our students.”

Edgington estimated the projects total cost at about $5.4 million, coming from the city’s contribution, Regional Transportation Commission funding and NDOT funding. Starkey said about 25 percent of the money came from grant funding.