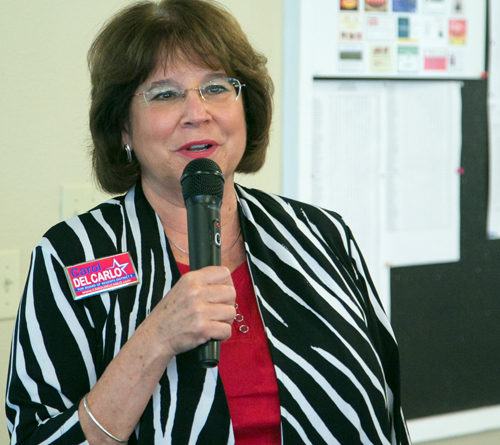 The Ambassadors had an information packed meeting on Tuesday morning. After Mayor Roy Edgington thanked everyone for their support of the 9/11 ceremonies, Peggy Gray announced the Grand Opening of the Fernley Republican Women’s Republican campaign office. The Grand Opening is scheduled for 4-6 p.m., Saturday, Sept. 17 at 140 E. Main St., Suite C. Several Republican elected officials are scheduled to talk and attendees will be served BBQ.

The Precious Paws Society’s Jennifer Pinkerton told the Ambassadors, “Our Trap, Neuter and Return program is very important to control the feral cat population. An unspayed female cat produces 2 litters each year and in just 9 years, there would be more than 11 million cats.”

Finally, Carol Del Carlo, who is running for the Board of Regents, District 9, discussed the importance of Community Colleges.

“We’ve done our students a disservice by telling them they all need to go to a 4 year college,” Del Carlo said. “Most jobs do not require a 4 year degree. Seventy per cent of job training can be obtained from a Community College.”

The Fernley Chamber of Commerce Ambassadors meet at 7:30 a.m., Tuesday mornings at the The Golf Club at Fernley.