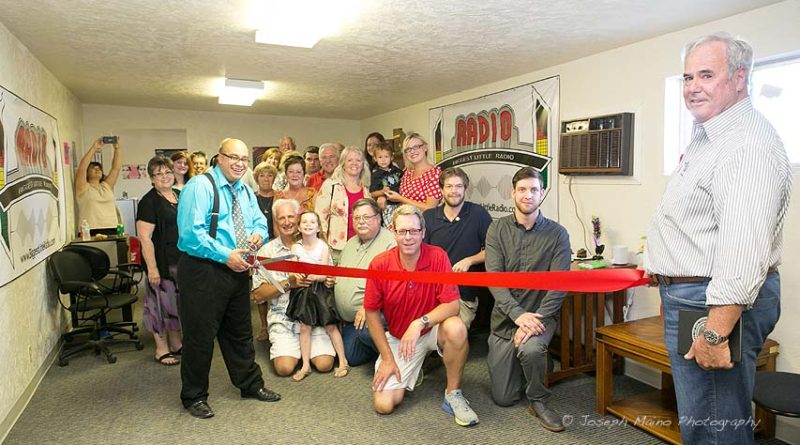 When someone first suggested to Juan Rodriguez that he look into starting a radio station in Fernley, he decided he didn’t want to wait the years it could take to get a license from the Federal Communications Commission for an FM frequency.

Rodriguez launched the station from a home studio in January, after performing a test run last November. Last Thursday, Biggest Little Radio and the Fernley Chamber of Commerce celebrated the station’s launch and its new studio at 25 E. Main St with an Open House and ribbon cutting ceremony.

Biggest Little Radio moved into the studio on April 8, and recently purchased upgraded studio equipment from a Fallon radio station that went out of business.

The station is available online 24 hours a day at biggestlittleradio.com and on the SHOUTcast app on mobile devices.

Rodriguez has worked for several years at radio stations in Reno, including five years at Alice 96.5 until 2010.

“I walked into a radio station when I was a little kid and said this is what I want to do when I grow up,” Rodriguez said.

He had his first radio show as Reno’s youngest radio personality at the age of 14 on KZSR, “Star 93” and has been working in radio off and on since.

Rodriguez adopted the radio name JFierce Rodriguez during his five years at Alice, 96.5, and also operates a mobile DJ business as DJ Fierce.

“He would make callers call in and say ‘You’re so fierce,’” Rodriguez said.

Rodriguez said he got the idea for Biggest Little Radio after finding out that getting an FCC license can take up to several years. While he hopes to eventually take the radio to the FM airwaves, it requires waiting for a frequency to open up or another station to go up for sale.

Not wanting to wait that long, Rodriguez said he came up with the idea of launching the station online. Most young listeners listen to AM or FM radio, instead downloading music online or listening to online stations or apps such and Pandora or Spotify, so having a local station online fits into those listening habits.

“With today’s technology and generation, we’re living in a digital world, I thought why wait, why not launch digital radio?” he said.

Rodriguez also has several weekly in-studio guest interviews that are recorded and available on the podcast page on the website.

While a love for radio and music is his main reason for getting into the radio business, Rodriguez said he hopes his station serves as an important community service, as well. The station’s website includes a schedule of community events, and he has provided music and entertainment at several community events, such as the Fernley 4th of July.

“It’s realizing what I can do for others and to show our younger generation you can do anything you set your minds to as well,” Rodriguez said.