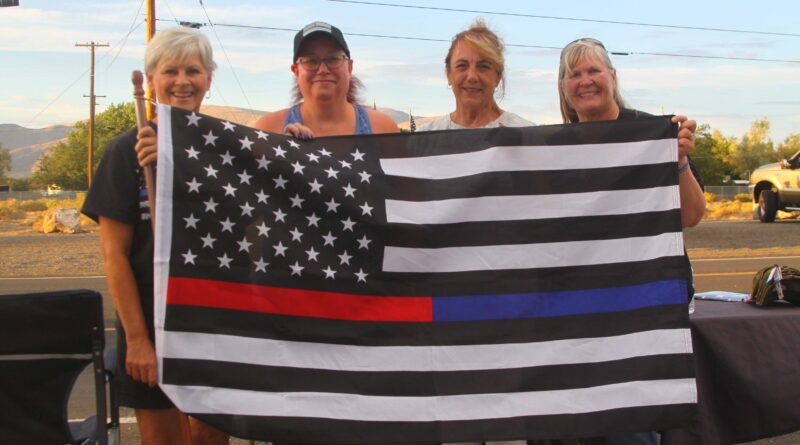 Laurie Swank was driving past the Lyon County Sheriff’s substation on July 31, a few hours after the second “Bridge the Blue” rally she had organized, when she realized the blue line flag they’d hung in front of the Canal Township Justice Court during the rally was gone.

Friday, the group replaced the stolen flag, and this one figures to be a little more secure.

About 50 people showed up for Friday’s rally, aimed at showing support for the deputies of the Lyon County Sheriff’s Office, and law enforcement offers around the world. After three protesters showed up at the July 31 event, the Blue Lives supporters were undisturbed this time, except for the occasional heckle from a passing vehicle, which was far outnumbered by supportive honks.

“The support for police in this town is huge,” Swank said.

Following the rally, about half the crowd moved to City Hall, where Mayor Roy Edgington, with help from Harry Wheeler and city employee Ray Lowery, raised a new blue line flag.

“This is for the men and women of the Lyon County Sheriff’s Office, our state troopers and law enforcement all over the world,” Edgington said. “May they have a good shift, and may they come home.”

The new flag was donated by Heidi Seaton.

“We need to support our law enforcement officers,” Seaton said. “There’s just no way around it.”

Swank started the ‘Bridge the Blue” rallies July 17, inspired by but not affiliated with the national Bridge the Blue organization. Only seven people attended the first rally, but more than 70 were there for the second.

“Nobody in town had any, and we had them in stock,” Mohler said.

A group of volunteers was also collecting donations, which the group will continue until the next rally, scheduled Sept. 11, to provide gift cards for the Lyon County Sheriff’s deputies and North Lyon County firefighters.

“I’m kind of excited to do this for our first responders,” Swank said.

One thought on ““Bridge the Blue” rally in Fernley supports LCSO”