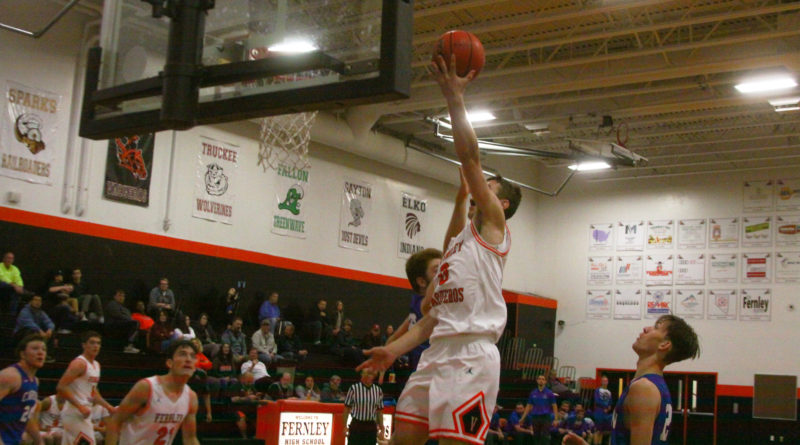 A strong second half and a hot-shooting debut carried the Fernley High School boys basketball team to a win over Carson in the first game of the season Tuesday night.

Rei Robinett hit six 3-pointers and scored 24 points in his first varsity start, with 13 of his points in the third quarter as the Vaqueros erased a 7-point halftime deficit on their way to a 50-49 win.

Four of Robinett’s 3-pointers gave Fernley the lead, the last one completing the third quarter comeback at 37-35 with 2:13 left in the period.

“He’s one of those kids that’s a streaky shooter, and when he gets hot, the guys know to find him,” coach Derek Miller said.

Fernley took that same advantage into the fourth quarter, which then went back and forth. Carson scored the first four points of the quarter to take a 39-37 lead, then sophomore Drew Miller scored to tie the game with 6:11 left, shortly before fouling out.

To that point, the Vaqueros’ leading returning scorer, Zach Burns, hadn’t yet scored in the game, but he made a free throw with 5:04 left to tie the game at 40.

“The nice thing for me is that shows you his maturity to be able to just find the open man,” Miller said. “He just wants to win games. He gets everybody else involved and then he came and hit some big shots for us late.”

Lucas Vanbrow nailed a 3-pointer for Carson with 36 seconds left to make it 50-49, then Russ Ortiz blocked a driving shot by Carson’s Abel Carter as time expired to preserve the win.

“I was happy with it,” Miller said. “I just wanted to get the season going. It’s good for us, especially the physicality, that’s one of the things we have to work on.”

Trent Robison led Carson with 24 points, and it was his presence inside that spurred Miller to go to a zone defense in the second half.

“Drew got in foul trouble, and I didn’t see a lot of their guys hitting 3s, and we were having trouble with No. 12 (Robison),” Miller said.

Robison scored seven points in the second quarter, which Carson closed with an 11-2 run to take a 25-18 lead.

“I was a little angry at half, we weren’t sharing the basketball and running sets,” Miller said.

With several players joining the team late because of the football teams run to the state semifinals, Miller said the team is a little behind in its preparation to open the season.

“A lot of it is just team things,” he said. “The first week we had to combine JV and varsity practice to have enough kids.”

The Vaqueros are replacing several key contributors from the team that reached the state semifinals last year, but Miller said he was happy with the contributions of his young players.

“We are starting a sophomore and some juniors that have no varsity experience,” Miller said. “It’s just getting them to learn the game and play together.”

The Vaqueros will get plenty of chance to play together this weekend, playing three games at the Lake Mead Christian Classic Tournament in Las Vegas. They will open the tournament Thursday at 4:30 p.m., against the winner of that morning’s game between Boulder City and Lincoln County.

“I want to play Boulder,” Miller said. “They beat us up pretty bad last year, and I want to see the Southern 3A teams.”

The Vaqueros will open league play the following weekend, when Elko and Spring Creek visit.

“We’re just trying to get ready for next week when Elko and Spring Creek come,” Miller said.