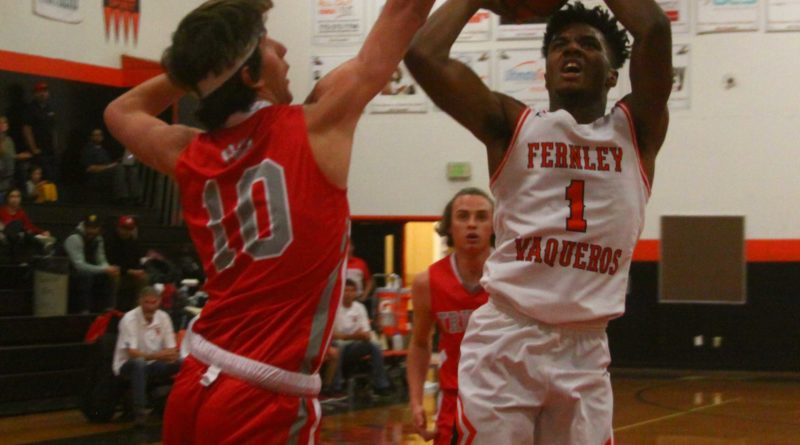 With wins in both games last week, the Fernley High School boys basketball team is in position to climb back to .500 in league play Tuesday night, before facing a coupe of difficult challenges later in the week.

The Vaqueros beat Sparks 69-51 last Tuesday, then came back from a double digit deficit to beat Truckee last Friday night, to move into fifth place in the Northern 3A with a 4-5 record.

Friday though, the Vaqueros fought back from an early deficit, and finally pulled ahead in the final minutes.

“To me it shows how much we’ve progressed, because earlier we lost a game like this to Spring Creek, got down early, dug a hole, came back and then just melted late,” coach Derek Miller said.  “I was just pleased. It was a big win for us.”

The Vaqueros got off to a cold-shooting start, falling behind 14-4 after the first quarter, and they trailed 16-4 when leading scorer Carson Kingston got whistled for his third foul, a charging call, early in the second quarter. But the Vaqueros managed to outscore the Wolverines 10-7 the rest of the half, and went to the locker room feeling very much in the game despite trailing 23-14.

“I told the boys we were lucky we were only down nine,” Miller said. “If they would have shot the ball a little better, we might have been way down. After we got going a little, I liked our chances.”

After Truckee cut it to 46-45, Thompson and Ceresola each hit a free throw and Jonah turner hit three of four to allow the Vaquerso to hold on.

Ceresola led the Vaqueros with 17 points, Tucker Hall, who hit three key 3-pointers in the second half, finished with 15, and Kingston scored all 8 of his points during the second half comeback.

The Vaqueros struggled early against Truckee’s zone press, although it wasn’t an aggressive, trapping press. Miller said the Vaqueros, who earlier in the season were too impatient and often launched a shot after just a pass or two, were also tentative in the first half, often passing up open shots.

That they handled the press better and made better decisions in the second half shows the progress the Vaqueros are making, Miller said.

“We’re a young team, and sometimes you’ve got to go through these battles to be where you want to be,” he said. “It’s just progressing as a team, making good decisions as a team, which, December, we wouldn’t have made those good decisions. So, I’m pleased with our efforts tonight.”