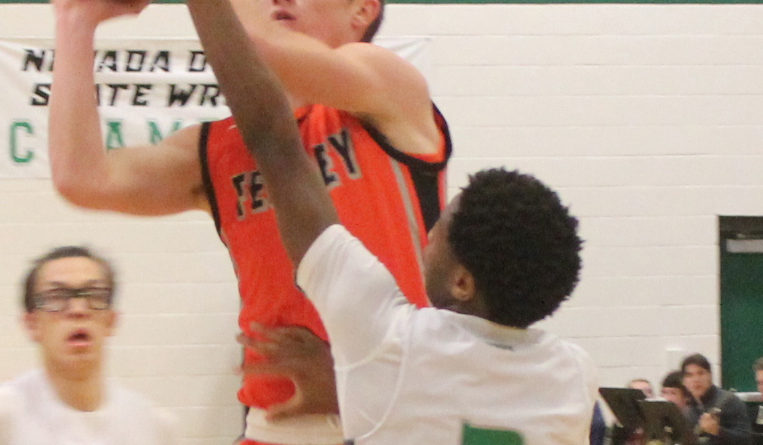 The Fernley High School boys basketball team has struggled to shoot the ball over the past couple of weeks.

“We did not shoot the ball well again, but we dialed in and played good defense,” coach Derek Miller said. “I’d rather be good defensively night in and night out than count on streaky shooting.”

The Greenwave started ahead, quickly reaching a 6-point lead before the Vaqueros scored. Fallon held its lead through most of the first quarter, but Fernley was catching up. In the final moments Fernley tied the game, then a trey by Dario Ceresola pushed the Vaqueros ahead 13-10.

The second quarter opened in a stalemate; the teams exchanged ties as they fought for supremacy. Fernley broke away though, pulling ahead to a 5-point lead. At halftime, the Vaqueros led 23-17.

The third quarter was intense. Both teams’ defense held the other back. Fallon was able to recover and nearly tie the game, ending the quarter 25-23 to Fernley.

The Vaqueros dominated in the final quarter. Their defense kept Fallon down as they sank basket after basket. The Greenwave tried to rally, but their efforts led to free throws for Fernley. With less than a minute left, it looked like the Greenwave might push the game to overtime, but free throws by Fernley’s Zach Burns put them too far ahead.

Fallon coach Brad Barton said his team had trouble getting the offense going; there were a number of good shots, but they wouldn’t go in. He said Fernley has lots of offensive power, so that struggle made it hard to beat them.

“Fernley knows how to play the game,” he said. “They’ve got some good shooters, some good scorers and they played really good defense tonight and kept us off our offense. So hats off to them, they played a great basketball game.”

“We did the job on defense,” Miller said,

Burns scored 19 points to lead Fernley, surpassing 1,000 points for his career when he hit two free throws with 0.4 seconds left in the game.

As a team, the Vaqueros made 13 of 17 free throw attempts.

Weather permitting, the Vaqueros are scheduled to travel to Thursday for the make-up of the game that was postponed last Tuesday. They are also scheduled to play Saturday at Lowry.