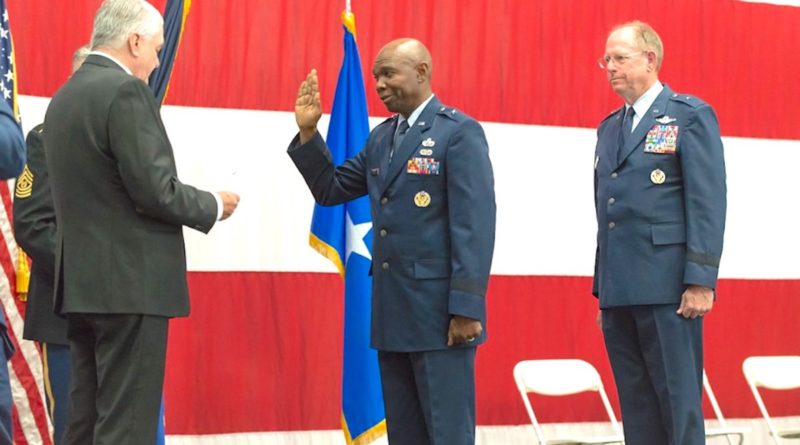 RENO — Brig. Gen. Ondra Berry assumed command Saturday of the Nevada National Guard in a time-honored tradition that has endured throughout the years of military history.

The 60-year-old Berry, a retired Reno policeman and recently a senior vice president in MGM Resorts International human resources office, became the state’s adjutant general after assuming the position from Brig. Gen. William Burks in a ceremony at the Nevada Air National Guard Base in Reno. Berry noted the coincidence of becoming the 30th adjutant general, and Gov. Steve Sisolak, the commander in chief, became the state’s 30th governor after he was sworn in earlier this year. Sisolak announced Berry’s appointment in August.

“He recognizes the critical role of our National Guard, emergency management, homeland security, mission and readiness,” the governor said. “His experience has trained him well.”

Sisolak said Berry, the state’s first African American adjutant general, will face domestic and overseas challenges as well as natural disasters. In his prepared remarks, Sisolak also thanked Burks for his service to his nation and nation and how he served as a trusted adviser.

Berry, who oversees 4,400 Army and Air guardsmen, delivered his comments before hundreds of Nevada Guard military and civilian personnel and to many retirees. Sen. Catherine Cortez-Masto, Congressman Mark Amodei and an aide for Sen. Jacky Rosen attended as did the mayors of Reno and Sparks and military personnel from the state’s partnership program, the Republic of Fiji and Kingdom of Tonga.

Berry, who enlisted in the Nevada Air National Guard in 1986 and was commissioned as an officer in 1990, became commander of the 152nd Mission Support Flight. He was named the assistant adjutant general, Nevada Air National Guard, in 2015. He said he would put the experience of the soldiers, airmen and civilians against anyone and added they make a difference time and time again by fighting forest fires or helping families. Furthermore, he applauded the dedication of the Nevada Guard’s devotion to duty, and the men and women who unselfishly leave their families and employers to serve their fellow citizens and nation.

Since 1864, Berry said the Nevada National Guard has had an important role in the state’s development.

“For 154 years, the Nevada National Guard has served the state and nation with distinction, class and excellence,” he pointed out. “Our history is historic, but our future is bright.”

Because of his experience in working with the community in both his roles with law enforcement and military, Berry touted the importance of both working together.

Burks, who served in the military for 42 years, was first appointed adjutant general in June 2009 by former Gov. Jim Gibbons and then reappointed twice to the position by former Gov. Brian Sandoval. He thanked those in attendance for their support and recognized former adjutant generals and former and current commanders of the Air and Army Guard. Burks, a Wooster High School and University of Nevada, Reno graduate, said the federal and state missions have assumed more responsibilities, but he added the Nevada Guard has responded by citing the motto of “Always Ready, Always There” and being on the same level as its active-duty counterparts.

“Don’t ever forget that our funding is about 95 percent and comes from the federal government,” he said. “You have to be as good if not better than the active-duty forces.”

Burks discussed the state’s progress with its partnership program during the past decade. He recognized the guests from Fiji and Tonga and said state partnerships are important to both the nation and Nevada. Historically and especially during World War II, he said that section of the world, the South Pacific, is important because of the free trade that moves through the area.

Burks pointed out the importance of family support and readiness groups and the diversity and inclusion of the Nevada National Guard. Under his command, more females and minorities have been selected for command positions in both the Nevada Army and Air Guard. He also said diversity, for example, is invaluable with its state partnership program.

Near the end of his remarks, Burks thanked many military-related organizations for their support of the military including the Nevada Support Military Alliance and Honor Flight Nevada. Burks had the opportunity to accompany his mother, Mary, last year on an honor flight to Washington, D.C. to see the nation’s memorials built to recognize the men and women who fought in the nation’s wars. His mother served as a nurse during World War II. Burks said the Nevada Guard must support the community because when times are tough, the state’s military will need the community’s help.

As Burks neared the end of his speech, he thanked his family for their support and also reminisced about his service during Desert Storm in 1991 as a weapons system officer who flew in the backseat of the RF-4C behind friend and pilot Ron Bath.

“I was lucky to be on the crew with Ron Bath,” Burks said. “You knew what the person was going to do.”

Burks was responsible for using the camera on the targets below. Crews at first flew over Iraq and Kuwait looking for Iraqi Republican Guard units and later they flew high over Baghdad and the adjacent countryside looking for command and communications centers as well as chemical weapons and rocket fuel plants.