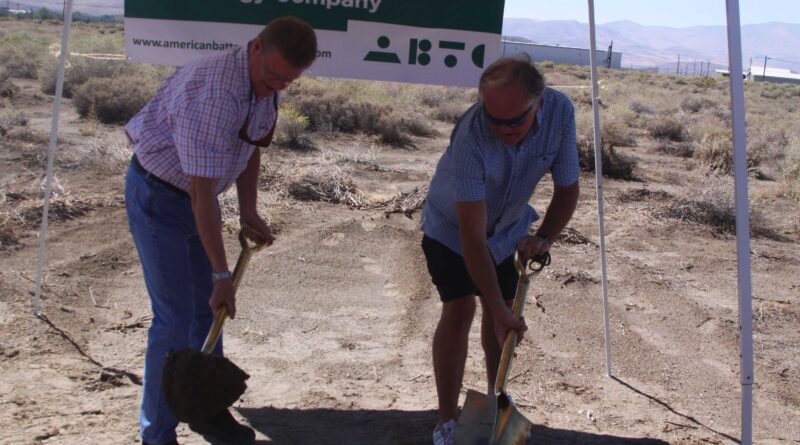 Time after time, new or relocating businesses coming to Northern Nevada usually cite some combination of a favorable business climate, location and logistics as the driving reasons for choosing the region.

All of those things were attractive to American Battery Technology Company Chairman and CEO Doug Cole, but it was a flat tire that sealed the deal.

The company, currently based in Incline Village, held a groundbreaking ceremony Aug. 27 to celebrate the purchase of about 12.5 acres adjacent to American Ready Mix off Logan Ln. in Fernley, where it plans to build a 60,000 square foot lithium-ion battery recycling facility in two phases.

Cole described the facility as a commercial pilot plant that will handle 20,000 tons of lithium-ion batteries, with plans for a second, larger facility, also to be located in Nevada, that will handle between 200,000 and 400,000 tons.

Cole said finding a location has been a three-year process. But while driving to Hawthorne one evening about two and a half years ago, he got a flat tire near Walker Lake. The first car that came along stopped, and a couple in their mid 70s asked if they could help.

“That sold me on Nevada for the rest of my life,” Cole said. “That does not happen in other states. The whole attitude here is can do, let’s help.”

Once he settled on Nevada, Cole said he was looking for a location in a Qualified Opportunity Zone, and after looking all over the state, he found it in Fernley, with the added benefit of affordable land, the proximity to Reno, and the easy access to Interstate 80s and the railroad.

“It’s the people, the town, the attitudes, and it’s summed up with my getting a flat tire,” Cole said. “I spent two years talking to everybody in Fallon, Fernley, Silver Springs, Carson City, Minden, Gardnerville, and this is the best spot for the first plant.”

Lead Onsite Project Manager Chuck Leber said the company hopes to choose a design-build contractor in the next three to four weeks.

“The first major challenge is getting the site plan approved,” Leber said. “We don’t have any permits yet. That’s a part of the process we’re going to be dealing with our design build contractor.”

Leber said he was hoping to have a Request for Proposals sent early this week to the six prequalified contractors the company has chosen.

“I think in four to five weeks, we might be able to sit down and talk about a contract,” he said. “Getting permits is going to be the critical path.”

Mayor Roy Edgington said the company will meet with the City’s development team to make sure the property is zoned properly and start the state permitting process.

Cole said when the plant is complete, it will employ between 50 and 70 people in three shifts, operating 24 hours a day, seven days a week.

A location hasn’t been chosen yet for the second plant, but Cole said that will employ 300 to 400 people.

The Fernley plant will be built in two phases, 30,000 square feet at first, then another 30,000 square feet in the second phase. It will include laboratories for quality control and for doing experimentation, office space and warehouse space for finished goods.

Once the contractor is hired and the permitting process is complete, the construction schedule is at the mercy of the COVID-19 pandemic, Leber said.

“I’m concerned about the labor situation with COVID,” Leber said. “I just came off a project in Arizona and the contractor there had a problem getting people on site. One of the questions I’m going to have for our potential contractors is what plans they have for mitigating those potential problems.”

If things went smoothly, Leber said the plant could be up and running in six months.

“But to be honest, I’m not sure how smoothly this is going to go, and we’re not going to know until we get into the middle of it,” he said.

Edgington, who is also the president of the Economic Development Authority of Western Nevada, said if the city’s permitting requirements and health concerns are met, the project represents the kind of economic diversification the state needs. He cited sales tax figures that show while Las Vegas is about 47 percent below normal, Northern Nevada is almost back to normal after the economic shutdown in mid-March.

“Unemployment is a lot less than in Las Vegas, and this is a reason,” Edgington said. “You have all these different sectors, all these different businesses, so if gaming takes a hit, you still have all these other jobs. If we didn’t learn anything out of all this COVID, what we should learn is that Nevada needs to diversity. And I think this is right in line with what NNDA and EDAWN is pushing, and GOED.”