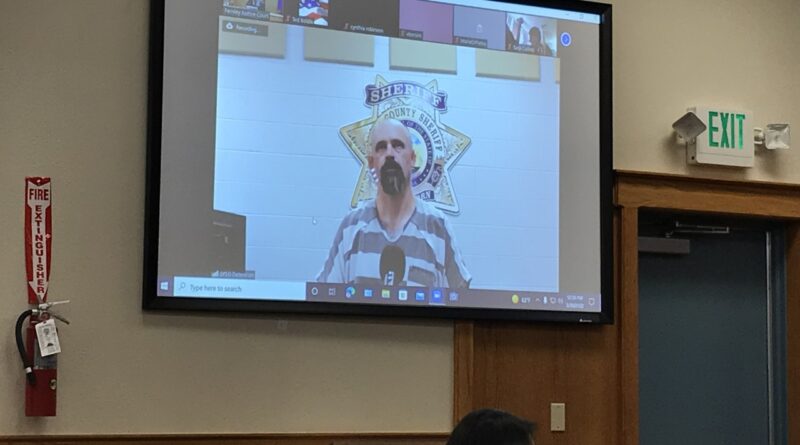 Canal Township Justice of the Peace Lori Matheus set bail Wednesday afternoon in the amount of $750,000 for Troy Driver, who is accused of kidnapping Naomi Irion.

Matheus also set conditions that if Driver posts bail, he will not be released until a GPS monitoring device is set up and installed, there is to be no contact with the alleged victim or her family, he must stay out of Fernley, except for court appearances, there must be no further arrests or violations of the law, and no possession of alcohol, drugs or drug paraphernalia and that he make all required court appearances and check in daily with court services. He will be subject to random alcohol and drug testing and not to discuss the case with anyone.

Matheus set a pretrial hearing for 10 a.m. April 5 and a preliminary hearing April 12.

Driver appeared for the hearing via video from the Lyon County Jail in Yerington, where he is being held. He is charged with kidnapping in the first degree. The criminal complaint filed against him charges that Driver did “abduct Naomi Irion and did hold or detain her for the purpose of committing sexual assault and/or for the purpose of killing her.”

Arguments regarding the bail amount will be held at a later date, as requested by Driver’s attorney, Mario Walther, citing Nevada Supreme Court rule 230. Walther said his office was not notified of the presence of the media at the hearing.

Nevada Supreme Court Rule 230 requires news reporters desiring to provide electronic coverage of a court proceeding to file a written request with the judge at least 24 hours before the proceeding; however the judge may grant the request on shorter notice or waive the requirement for a written request.

“We’ve not gotten any notices of who is in the courtroom and at this juncture, our concern is that already Rule 230 may already be violated,” Walther said.

He said he believed the Lyon County Sheriff’s office may be livestreaming the hearing on Facebook. And that by releasing the Zoom meeting to the public, the court may have lost control of who is recording the proceedings and who has provision to use the recordings afterward.

Walther also said his office did not receive the probable cause complaint and risk assessment until the day of the hearing. He also said the defense needs a private investigator to determine if there is probable cause and past criminal history in order to properly address any bail arguments or motions.

Walther requested bail be set in the amount listed on the probable cause sheet, which was $750,000, and that further arguments regarding bail and under Valdez-Jimenez v. Eighth Judicial District Court be reserved for a later date.

Lyon County Deputy District Attorney Samantha Edmondo said Walther’s concerns about the media and Supreme Court rules were under the purview of the court, and she said arguments regarding the PC complaint and the timing of the appointment of council are procedural arguments to be made at a later date.

She also said the State does not object to his bail remaining at $750,000, but she said she has arguments to put on record, if needed, after the court addresses the media issues.

Matheus read Rule 230 for the record, and said the written request requirement was waived by the court.

“All press that is present in this court today has been authorized by the court through the court’s bailiff,” Matheus said. “There is no requirement under 230 to notify defense or prosecution of the court’s decision on whether or not media will be present in the courtroom.”

Matheus then ordered the bail be set and the Valdez hearing be held at a later date.

Matheus said the victims or their family have a right to make a statement regarding bail or release, but after Edmondo conferred with Irion’s family, she said the family had elected not to make any statement.

After the hearing, Iron’s brother, Casey Valley, said the family would like to convey the importance of Troy Driver’s safety if he is released on bail.

Valley said he was neutral on the possibility of Driver being out on bail.

“I’m surprised that there was bail at all, but if I was in that situation, I would have a hard time posting that,” Valley said.

Regarding Driver’s possible ability to post bail, Valley said, “He does own expensive trucks, that’s all I know about him.”

Valley said seeing Driver’s face on the courtroom video was a little bit of a shock.

“He’s just a human,” Valley said. “We don’t know very much about him and he’s a suspect, and if he did what he’s suspected of doing, then he’s not a very good human.”

He said seeing Driver charged and appearing in court does not give the family any sense of justice.

“Because I don’t have my sister back,” he said. “We don’t want anything except for Naomi to come back home.”

Valley was also asked what he would say if he could talk to Driver.

“I would ask him to put himself in our shoes, and what he would want a suspect to do if it was his daughter that was missing,” Valley said.

Valley said a public search is planned for Saturday in the Hazen area, and will be staged at the north end of California Road.

One thought on “Bail set for $750,000 for Naomi Irion kidnapping suspect”