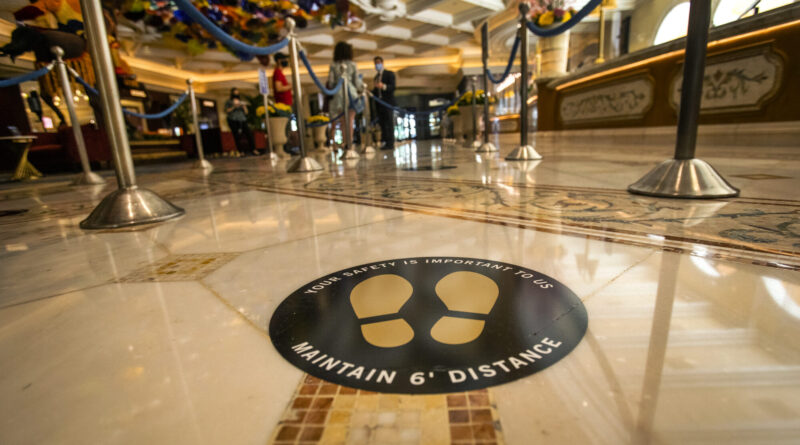 Three counties have signaled to the state their intent to open to 100 percent capacity as soon as possible after assuming responsibility for pandemic health and safety decision making at the beginning of May.

Representatives of Carson City, Lyon County and Storey County told members of the state’s COVID-19 Mitigation and Management Task Force on Wednesday that their goal is to progress to a full reopening after the state hands over decision-making authority on May 1. Gov. Steve Sisolak, on Tuesday, announced that the state will lift its six-foot social distancing mandate on May 1, thereby allowing counties that want to to open up to 100 percent to do so.

However, counties are being urged to continue to follow the Centers for Disease Control and Prevention’s recommendations on social distancing, which, as of now, remains at six feet. Officials from two of the three counties, Carson City and Storey County, said that they intended to still follow the CDC’s guidance, while Lyon County Manager Jeff Page noted his county’s plan is “silent” in reference to the federal recommendations.

“For all the counties who are going to take advantage of the 100 percent reopening, I just want everyone to have realistic expectations that cases will surely go up when that happens,” Morgan said. “I just want the expectation to be realistic that we will see an increase in cases when counties increase capacity to 100 percent.”

The question is whether those case increases will then manifest as increased COVID-19 hospitalizations and deaths, or whether the vaccination effort is able to prevent serious illness from the virus. That, Morgan said, is the unknown.

Page, Lyon’s county manager, acknowledged that increasing case numbers is likely a reality, saying he anticipates the county will “have some bumps in the road” and that “we’re going to get some people sick for a while.”

However, Page again urged members of the task force to encourage state officials to outline a framework now — as the state prepares to hand over control to the local governments — for at what point the state might need to take back the reins, as in the event of a significant statewide surge.

“Hopefully the state will start taking a look at that so it’s not perceived by this governor or a future governor as some political knee jerk reaction,” Page said. “It was hard enough in March 2020 to do what we did, and if we have to go back to that, it’s going to be even more difficult.”

The three plans from Carson, Lyon and Storey share many similarities, though Carson’s plan still has to return to the Board of Supervisors for approval and nothing is set in stone as counties can change their rules at any time. All three plans allow retail stores, indoor malls, indoor restaurants and bars, places of worship, gyms and other establishments to open at 100 percent starting May 1.

But not all counties are eager to get to 100 percent immediately. Esmeralda County, which also presented to the task force on Wednesday, has proposed keeping the state’s 50 percent occupancy limits for businesses in place for the time being, with gatherings limited to 250 people or 50 percent. (Esmeralda, the state’s tiniest county by population, has a little fewer than 900 residents.)

“We’re cops, so we’ll follow what the health department says and the CDC,” Elgan said.

Six more counties — Washoe, Lander, Lincoln, Mineral, Pershing and White Pine — will present transition plans to the task force on Thursday, while the remaining seven counties, including Clark, will come before the task force the following Thursday.

In response to Sisolak’s Tuesday evening announcement, the Washoe County Commission canceled a special meeting it had scheduled for Wednesday in advance of its task force presentation. The county, in a statement, said it would need to update its plan — which the commission heard and proposed amendments to last week — in light of the governor’s announcement.

“I applaud the governor for reopening the state on June 1 and getting our economy moving again,” Washoe County Commission Chair Bob Lucey said in a statement. “Here in Washoe County, we have been working toward this goal for months.”

Washoe County’s original plan proposed lifting all capacity limits on businesses starting May 1 so long as they continued to provide for six-foot social distancing, a requirement that would be dropped once the county hit a 75 percent vaccination rate. Commissioners voted to amend that plan to loosen certain restrictions, such as allowing social distancing to reduce to three feet once the county hits a 50 percent vaccination rate.

In Clark County, Commission Chair Marilyn Kirkpatrick said at a press conference on Wednesday that she expected the county to be able to get to 100 percent reopening by June 1 as long as people continue to get vaccinated against and tested for the virus.

“My job is to ensure that our community is safe, first and foremost, and that’s what we’ve done all along is put public health first,” Kirkpatrick said. “However, we also need to weigh all the impacts from businesses that need to get back on track, mental health capacity for folks and unemployment, all of that weighs on a person in many ways.”

Under Clark County’s proposed plan, which will be considered at a commission meeting on Tuesday, the 50 percent capacity limit currently in place statewide for most businesses will remain in place, though certain other restrictions will be lifted.

For instance, restaurants will be able to seat a maximum of 10 people per table instead of six, self-service buffets will be allowed and hot tubs and spas may open. Additionally, night clubs, day clubs and strip clubs, which are currently closed under statewide rules, will be allowed to open at 50 percent capacity on May 1.

The county’s plan also lays out a framework for large gatherings, with events allowed to operate at 100 percent capacity if 60 percent of the county is vaccinated, cases remain below 1,150 per week and the test positivity rate is at or below 5 percent.

Kirkpatrick noted Clark County is in a significantly different position than rural counties, which may choose to open at 100 percent on May 1. As the state’s economic driver, Clark County needs to have a “measured approach” to reopening, she said.

“Storey County has not had many positives this entire time. Lincoln County has not. So they likely could open to 100 percent much faster,” Kirkpatrick said. “Clark County is the engine that drives the train economically. We’re also the engine that has the highest unemployment rate. We do not want to shut that down.”

Jackie Valley contributed to this report.