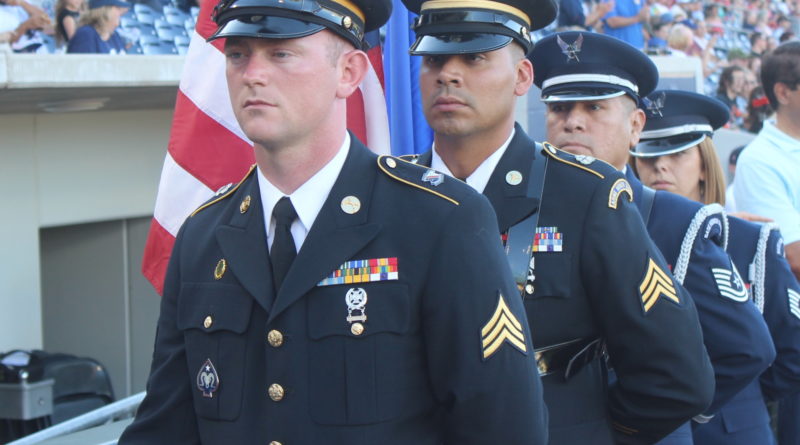 The Reno Aces baseball team is honoring the area’s veterans on Aug. 3 with its annual Military Appreciation Night at Greater Nevada Field.

The event has a special meaning for Aces General Manager Emily Jaenson. She is the wife of Navy veteran who served on SEAL Team 8 based in Virginia Beach, Va., and then as an instructor at Naval Air Station Fallon. Her younger brother and grandfather also served in the Navy, one uncle enlisted in the Marine Corps and another uncle fought in Vietnam with the U.S. Army.

An evening of activities is planned for Military Night. She said Army and Navy representatives will set up recruiting tables and also take part in the pregame ceremonies and interact with the fans. Other activities include an honor guard parading the colors, a recognition of Soldiers of the Year and new recruits taking their oaths.

The highlight of the evening, though, takes place during the seventh-inning break.

“We will be dedicating a POW-MIA (prisoner of war/missing in action) seat,” Jaenson said. “We’re working with Sierra Nevada chapter 989 of the Vietnam Veterans of America on that event and dedication,” she said. “We’ve asked the league for an inning extension in the seventh. We’ll set up all the flags, introduce guests, stop the game and read a plaque. Then we’ll sing ‘God Bless America’ going into the seventh-inning stretch.”

J.R. Stafford, president of chapter 989, said he approached the Aces some time ago about dedicating a chair to the POW/MIA at Greater Nevada Field,” he said. “The Aces were very gracious wanting to do that.”

Stafford said the chair will be located in section 118. He said it will be both an honor to recognize veterans, both living and present, and to remember those who were either captured by the enemy or were declared missing in action.

Before the Aug. 3 event, Stafford and the Aces will work together to firm up special guests and groups who will attend the appreciation night. So far, she said a representative from the Nevada Veterans Coalition will sing the national anthem.

“We would like to do a video from as many players and front-office staff as we can to play and say thank you to all of our family members who served,” she said. “It’s a thank you and showing our gratitude in a much bigger way on a very special night.”

In keeping with the Military Night theme, she said food items also have a special name for the event such as the 4-star general burger, freedom funnel fries and tango (tater) tots.

Jaenson said she has been working with groups who are interested in coming to Military Night. She added military members and their families can go to renoaces.com to order tickets. For discounted group tickets with Vietnam Veterans chapter 989,go to https://groupmatics.events/event/VietnamVeterans989.