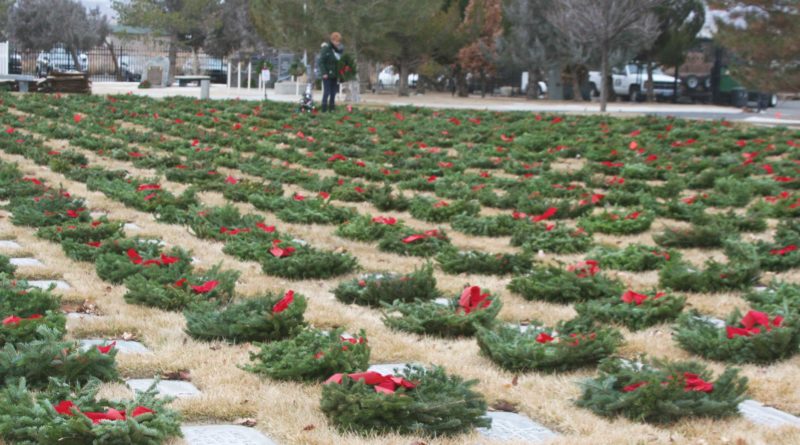 Throughout human history, the evergreen wreath has been offered as a tribute to heroes, an enduring symbol of valor and sacrifice.

Saturday morning, a crowd of almost 2,500 placed 8,349 wreaths, one for every gravesite, at the Northern Nevada Veterans Memorial Cemetery as part of the annual Wreaths Across America event.

The event take place at veterans cemeteries across the nation at noon Eastern time on the third Saturday of December.

“In this season of giving, we pay tribute to those who have given us the most precious gift of all, the gift of freedom,” said Kat Miller, the director of the Nevada Department of Veterans Services.

Kathy Lester was one of those 2,500. As a former volunteer at the cemetery, she used to be the person serving coffee during events such as Wreaths Across America or the annual Veterans Day ceremonies, but Saturday she was there to place a wreath and say a few words at the grave of her late husband, U.S. Army Cpl. Paul Lester, who fought in World War II.

Paul Lester grew up in New York City before joining the Army Air Corps, which later became the U.S. Air Force. Kathy Lester said that Paul used to joke that it was there that he learned to drive a Jeep.

“He’s from New York City, so you don’t learn to drive a car there,” she said.

The couple met in Florida after the war, where both attended the University of Miami. Paul later became a high school and college teacher, while Kathy worked at a hospital, until the couple moved to Reno, where they bought a house in 1981. Driving was, ironically, one of the reasons the couple moved out west.

“We wanted to get away from Miami and bumper to bumper traffic,” Kathy Lester said.

Silverland Middle School students Stacie Laird and Megan Walker Coghlan have no relatives buried at the cemetery, but decided to contribute to the effort in their own way, removing leaves from headstones so people could read the names.

“For me it means respect,” Laird said. “It feels good to have respect for all of the people who have served. Even if they’re not family, you should still help out.”

Before the laying the wreaths, Office of Nevada Veterans Services director Kat Miller talked of the importance of remembering those veterans we’ve lost, and the meaning of that recognition.

In her role as director of Nevada Veterans Services, Miller said she is privileged to serve all veterans in Nevada.

“I serve veterans, but how do you serve a man or woman who no longer walks the earth?” Miller asked. “You do it by remembering them, by honoring them, and by teaching future generations about their accomplishments. We remember with love and pride the family and friends who are buried here, but we also honor the veterans laid here that we never met, but we will never call strangers because we have a shared love of country that makes brothers and sisters of us all.”

Miller related a story of an elderly man standing in front of a headstone at Arlington National Cemetery, with tears running down his face. A young man, moved by the sight, walked over to the old man, put his hand,on his shoulder, and asked “Sir, do you know that man? Is he yours?” The old,man softly said, “Not one of them son, all of them.”

“And the old man was right,” Miller said. “All of them,are ours. Ours to remember, ours to honor and ours to hold in our heart and remember their stories and teach them to the next generation.”

One thought on “About 2,500 turn out for Wreaths Across America”