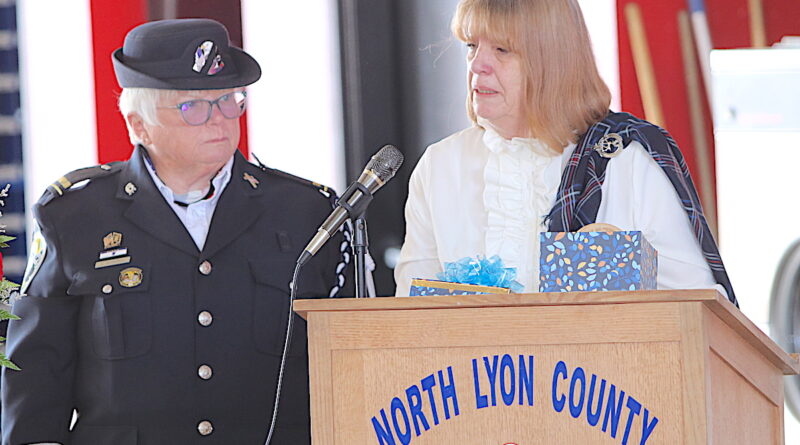 Brett Palmer not only touched the military family with his leadership and vision for the Northern Nevada Veterans Memorial Cemetery, but he also was remembered for his years as a law enforcement officer who protected his community and county.

The 68-year-old Palmer, who died on Aug. 23 at his Fernley home, was president of the Nevada Veterans Coalition, a volunteer organization that comforts families at military funerals as well as conducting ceremonies, raising money for special projects such as Wreaths Across America and improving the NNVMC.

Palmer’s memorial service, which was attended by hundreds of people on Oct. 9 at the packed North Lyon County Fire Protection District station, remembered the life of a man who gave of himself.

“For 36 years, Brett defended and protected the citizens as a law enforcement officer,” said Sharon Serenko, a chaplain with the NVC who narrated Palmer’s service. “The last 16 of those years, I am proud to say, right here in Lyon County as a deputy sheriff.”

Serenko said Palmer’s days of serving weren’t over after he hung up his deputy’s uniform for the final time.

“He was asked by a man named Dave Parsons to take over a small group dedicated to the veterans’ cemetery right here in Fernley,” Serenko said.

If Palmer, who served his county as a young U.S. Marine, had a vision, he was destined to follow through on his ideas.

“Brett’s vision for the Nevada Veterans Coalition was to not only support the cemetery itself, but to build a premier honor guard dedicated to giving every single veteran interred at this cemetery the final honors each and every one of them earned,” Serenko said. “We promised to carry on in his name.”

During the past decade, the NNVMC has seen many improvements implemented by the coalition. Serenko said the improvements included new flag poles, the Trooper Memorial and the equipment the NVC purchased; yet, he and the coalition felt they needed to honor the unclaimed remains of hundreds of veterans whose lives were left in a box in a funeral home or in a storage shed. In 2017, the NVC conducted the first of many military services for those forgotten veterans.

The first group of 27 veteran received their military honors in a September 2017 ceremony that began with an escorted motorcade from Reno, through downtown Fernley and finally to the NNVMC to their resting place – their final home. Residents from Lyon and surrounding counties lined the city’s Main Street as the procession moved its way to the cemetery. The coalition, along with the Missing in America Project, many state and federal agencies, Walton’s Funeral Home and other mortuaries, had a significant role in conducting the identification process and arranging for a fitting funeral.

The veterans’ remains had gone unnoticed on a shelf for more than three decades until they were identified and certified to be interred at the veterans’ cemetery. Those veterans grew up in different parts of the country, but their final home of record ended in Nevada.

The number of unclaimed remains became personal for Palmer.

“He put a team together and asked one of the really great computer sleuths, Linda Freeman, to find out just how many there were,” Serenko said. “She was to get them verified and then get them here to be placed. She worked countless hours and was able to locate and verify the eligibility of 220 veterans left abandoned in Northern Nevada.”

Serenko noted the longest forgotten veteran. Lyle Prescott, who was born in 1892, had died in 1948, and his remains sat on a mortuary’s shelf until the coalition found him.

“I have known Brett for many years, and I think this was one of his finest accomplishments,” Serenko said.

Another project that became dear to Palmer was the annual Wreaths Across America project. During the year, the coalition raised thousands of dollars for the wreaths. What started out as a small number of wreaths placed around the cemetery became a wreath for all 8,000 veterans interred at the NNVMC, and any extra wreaths were sent to neighboring cemeteries including Churchill County. Serenko said the day of Palmer’s remembrance was to honor a life given in service to others.

“We of his Nevada Veterans Coalition, especially the honor guard, feel honored to have known him and to have been part of his life, we are honored to set aside this time to remember Brett’s service to all of us,” she said. “Motivated by a spirit of devotion and inspired by undying love, Brett gladly went forward with his fellow patriots, proudly following the traditions of those Marines, sailors, soldiers, airmen, guardsmen and law enforcement officers who went before him, continuing their long lie of preserving our heritage of freedom while promoting liberty and democracy to the oppressed around the world.”

After the service, a motorcade left the fire station and headed to the NNVMC to give guests a walking tour as a tribute to a man who held the cemetery dear to his heart.

“We are grateful for the support and kindness of those who share their feelings for our beloved Brett. We know that many of you will mourn with us and we ask that you respect our privacy during our time of grief,” the Palmer family said after his death.

Those who knew Palmer reflected on his life, but more importantly, what he did for others.

David Rifkin, a member of the NVC honor guard, first met Palmer five years ago. At first, Rifkin, who had moved to Fernley, said Palmer was hard to read, a tough guy. Those perceptions were short lived.

“As president of the Nevada Veterans Coalition, he had a huge heart and how he helped veterans,” Rifkin said.

Rifkin joined the honor guard, but for his first year, Palmer called him “the rookie.” Rifkin said Palmer became his mentor and trained him.

“It’s a huge loss for us,” Rifkin said. “He was the heart and soul of Wreaths Across America, the 9/11 remembrance. He did so much for this community.”

In lieu of flowers, the Palmer family is asking for his friends and those in both the veterans and civilian communities to donate to Wreaths Across America.

Those who knew Palmer offered their remarks either in person or on social media.

Serenko, who conducted the service, said the day Palmer died was the second hardest day of her life. The first was when her husband died.

“Brett was there for me when my husband passed away and he’s been like a rock in my life for all these years. I was blessed to have known you. You might be gone from this world but you’ll never be gone from my heart. You inspired me and others and you will never be forgotten, because of your dedication to the veterans, to the veteran cemetery and to the people of this town.”

“Brett Palmer was an inspiration to me with Wreaths Across America,” Elliott said.

At the annual Fallon Cantaloupe Festival in August, Elliott set up a table to accept donations for Wreaths Across America. He collected more than $1,000 in donations.

Above all, Elliott said Palmer’s patriotism and love for county was apparent at the different functions. He always insisted on saying the Pledge of Allegiance.

“Well, I figured he would help us here in Fallon by putting our extra wreaths on our local veterans places of internments at the cemetery,” Elliott wrote. “After walking the cemetery and placing the wreaths, he would call me to find out if we had them all covered.  A few times we did.”

Brigette Stafford from the Vietnam Veterans Association Sierra Nevada Chapter 989 said one way to honor Palmer’s legacy is to participate in Wreaths Across America and donate to buy wreaths to remember those interred at the cemetery.

“It was very true Wreaths Across America was very special to Brett,” said Glenna Smith, public affairs officer for VA Sierra Nevada Health Care System in Reno. “Every year he would talk about the number of wreaths he had. Finally, he had a wreath for every spot in the cemetery.”

Smith, who has known Palmer for 20 years, said her friend had an important role in ensuring a 9/11 ceremony was conducted in Fernley and the schools were involved.

Tom Draughon of Fernley worked with Palmer for more than a decade on the honor guard and also served as the master of ceremonies at many cemetery events.

“I’ll make sure the coalition carries on,” said the Navy veteran.

Former Fallon resident Dan Gilbert said it was easy to detect Palmer’s background in the military and law enforcement through his words and mannerisms.

“He loved the country, the state and most of all, veterans, regardless of when, where or what branch they served,” Gilbert wrote on Palmer’s Facebook page. “He treated you wish the utmost respect and reverence. Rode with him many times on the motorcycles to honor local vets in the area.”

Gilbert said a large group would visit veterans’ home and honor them with a plaque for their service in front of their neighbors.

“He was selfless in a world of selfish. He was a friend, shipmate and brother that will be greatly missed for what he did but mostly for who he was,” Gilbert said.

Lyon County Sheriff Frank Hunewill remembers Palmer when they served together as law enforcement officers. Hunewill said Palmer was his training officer, and they worked together on patrol.

“Over the years, I stayed in contact with him,” Hunewill said of Palmer after he retired. “I’d come up here (to Fernley) and have a cup of coalition coffee.”

Fernley Mayor Roy Edgington said Palmer had a knack for asking for help with the veterans’ cemetery. When Palmer received a donation of trees, he would ask the mayor if they could be planted. If a big rock with an inscription was donated, Edgington said Palmer water to place it at the NNVMC. The city of Fernley obliged.

“We were always there for him,” Edgington said, his voice choking up.

David Sousa, a former state commander for the Veterans of Foreign Wars, said Palmer felt a love for the community.

“I know Brett would be blown away by this support and love coming from the community, the veterans community,” Sousa said.

During many military cemeteries, an honor guard from the Nevada Army National Guard would fold the flag and present it to a member the deceased veteran’s family.

“From my perspective, Brett was the first to personally welcome me into the Honor Guard system,” said Richardson, the Nevada State Military Funeral Honors coordinator and Army National Guard retiree with more than 35 years of service.

Richardson said Palmer was his contact for every service.

Perhaps Kristin Kowalski McFarlane said it best when she left a message on Palmer’s Facebook page.

“Thank you for your service and the dedication you put in to the Nevada Veterans Coalition. Thank you for letting me be so involved and helping me to volunteer out there; your efforts were not for nothing and I will continue to honor those being buried there. Your quick wit and charm will forever be in my heart. Thank you for everything Brett G. Palmer. I’m going to miss you so much. Hope you realized what an impact you made on so many lives.”