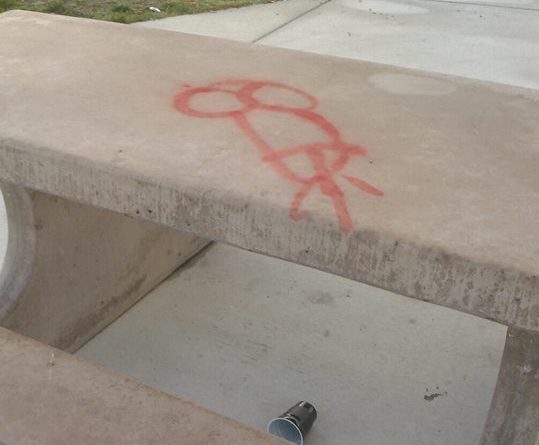 For the second time in a week, the Out of Town Park has been his with vandalism.

On Oct. 31, several signs and tables at the park were sprayed with graffiti.

This followed the extensive vandalism reported last week by the city.

In that instance, there was multiple incidents of graffiti on buildings and playground equipment, significant damage to the mature trees that beautify the property, along with other significant damage to landscaping. The railings in the small gazebo area were deliberately pulled out of the concrete, toilets were spray painted, and pipes into the toilets were pulled out.

There has been significant damage to the OTP gazebo roof (vandals climb onto the roof and jump and down to dent/impact the roof). This item alone will cost more than $5,000 to replace.

Secret Witness is offering a reward in connection to the vandalism, and more information is available at http://www.secretwitness.com/cases.php?cat_id=14.

One suspect has been arrested in the case, but others are still being sought.

City staff has installed some security cameras to help combat the destruction and hopes to implement more as budget allows.

The City is very limited in funding, and has just three employees who manage all of its parks.

Photos courtesy of the City of Fernley