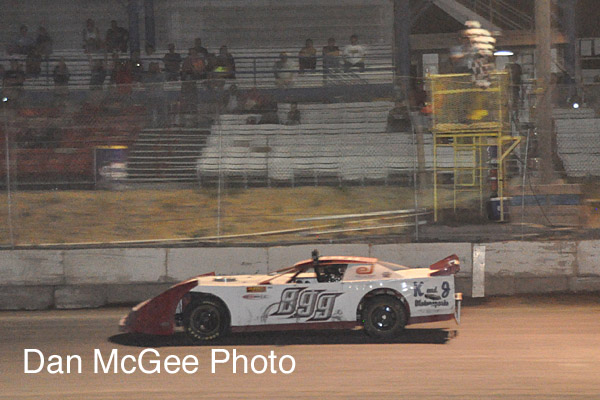 95A Speedway not only had three of its regular classes running Saturday but also the Nevada Pro Stock Association’s series. The series was running the eighth round of its 10-round series.

That was the Gordon Russell Senior Memorial, which is the last Nevada Pro Stock Association round that paid $1,000 to win, and the winner would earn a special 6-foot tall trophy.

“I was trying hard and it was taking everything we had to stay with (Jay Sears),” Jesse Gonzalez said after winning the Pro Stock main. “The car’s the best it’s ever been. The track was slick and I couldn’t have done this without Jesse and my cousin Malen as he spent some time at the pits, helped us change some set ups and got us going.”

Then he thanked J&K Motorsports, Jesse and Kari Gonzalez (who sponsored the $1,000 winners prize), the Nevada Pro Stock Association as well as his friends and family that has made this happen.

When the green waved on the 16-car field Sears, behind the wheel of Travis Peterson’s “Flyin’ 56,” machine took off with the pack in hot pursuit.

Five laps into the 25-lap contest Jesse Gonzalez spun in Turn 2 and then clipped by Cory Sample, who was unable to avoid him. The caution was extended as the track crew picked up part of the bodywork that came off Gene Kay’s car.

Once things were sorted out the green waved again and Sears took off with David Paine close behind him. Soon after that James Gonzalez took over second with Paine holding down third.

The next caution came when the nose work on the car Ed Goss was driving kind of rolled up and there was more debris in Turn 2. Once that was cleaned up racing resumed only to slow again when the car of Donny Richardson lost a wheel in Turn 4.

On the next restart Sears took off again with Gonzalez and Paine giving chase. Just as there was a challenge for the lead Goss caused his second caution, on lap 15, when the hood work once again rolled up and he was sent to the pits.

There is a “two caution rule,” and any driver that has caused two of them is sent to the pits.

That restart ended with a multi car tangle in Turn 2 along with debris in Turns 3 and 4. So that took a bit to unravel and get things back in order.

Up front Sears was still under pressure by Gonzalez while Paine was running a close third. Further back there was another duel between Kay and Sample, which ended with a spin and a caution.

With only a few laps to go Gonzalez stepped up his challenge to Sears as they tore around the track. But Sears was able to hold on to the lead.

Behind them several drivers had either dropped out or were about to.

Then, with four to go there was another caution when Gorden Russell and Al Goss spun on the backstretch.

After everyone was lined up the green waved but this time the motor in Sears car let go and Paine couldn’t avoid him. Gonzalez took off while Paine was able to get around Sears, who coasted to the infield.

Up front there would be no catching Gonzales as he stormed away to score the victory. Behind him Rob Grace took second ahead of Gary Nevers and Darrick Rauscher.

The night ended as the winners celebrated their victories.

When the IMCA Modified main began 10-cars took the green with Don Childs leading Andy Strait. An early caution slowed thing and when the green waved again Don Childs had Alec Childs on his back bumper.

Strait briefly held third until Cory Sample took the position on the back straight then set his sights on the leaders. Behind them Shawn Natenstedt was picking off other cars one by one.

Soon Strait and Natenstedt were having a side-by-side duel but things slowed when Jerry Crowley spun and brought out a caution.

On the green Sample took second but behind the leaders three cars tangled bringing out another caution. Once the field formed up the green waved again.

Up front Sample used his front row position to leap into the lead. Then on the backstretch Natenstedt took over second.

Now Don Childs, Strait and LaRoque were disputing third. Up front Sample and Natenstedt were pulling a break away and leaving the pack in their dust.

In the final laps Strait caught Don Childs and took over third. Ahead of them Sample and Natenstedt finished one-two for the night.

“Kind of had to be patient at he beginning and let everybody file out. The track was real racy but it was dirty so kind of hard to get a hold of. And I need to thank my dad,” Sample said after the race.

The next two weeks will be busy for Sample. First he goes to Medford, Oregon for a race then flies to Boone, Iowa for the IMCA Super Nationals.

Six Street Stocks took the green to start their feature race. Up front Michael Burns was on point followed by Rick Miller and Cody Morris

Soon after the start Burns spun out of the lead and handed the point to Miller. Then there was a caution for debris on the front straight while Trevor Quell headed for the pits.

At 95A restarts are side-by-side. Up front was Burns as he didn’t cause the caution and Miller.

On the green it took Miller until Turn 3 where he used an inside move to make the winning pass. Behind him Derrick Ramthun had moved into third ahead of Morris.

There was once more caution when Morris spun but he was able to regain fourth while there would be no catching the flying Miller.

Burns ended up second ahead of Ramthun. But for Miller it was a special victory as it was his birthday.

“It was pretty fun, we went to the front but it was a little slippery so I had to do a little tip toeing,” Miller said. “Going into Turn 1 and 2 was good except right in the middle, you kind of drift up so you have to compromise and go in easy and come out hard. I want to thank my brothers, Miller’s Chop Shop, J.T. Stark, Shumways Mobile Home Services, Shoeman’s Custom Cycle, Davis Distillery and A&W Family Restaurant.”

Apparently several Super Stock 4 drivers said they would be in attendance but only two showed up, Justin Busch and Jesse James. While this was disappointing they actually put on one of the closest finishes of the night in their main.

After winning the heat race Busch took off with James in hot pursuit when the main began. They also had to deal with a slick track, especially coming out of Turn 4 and that seemed to equalize things a bit.

In the final laps James was closing the gap and at times almost got alongside Busch. At the checkered flag it was a narrow victory for Busch.

After the race was over both drivers did a victory lap in formation.

Up on the flag stand Junior Flagman Brent Rauscher was helping and waved the green, white and one of the checkered flags. After each main he and the flagman went down where the youngster presented the winning driver with a checkered flag for their victory lap.

The next race will be Saturday, September 17 with a 6 p.m. starting time. That will be champion’s night for the speedway.