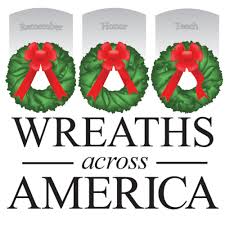 When the Nevada Veterans Coalition became involved with the Wreaths Across America project in 2007, it placed 28 wreaths on veterans’ graves at the Northern Nevada Veterans Memorial Cemetery in Fernley.

This year, for the third year in a row, the Coalition will have enough to place a wreath on every veteran’s grave during this year’s event, on Dec 17.

Once again, the Nevada Veterans Coalition will honor the veterans who gave a portion of their life for our country. On 9 a.m. on Dec. 17, NVC will be placing wreaths on veteran’s graves at the Northern Nevada Veterans Memorial Cemetery.

Last year the goal of placing a wreath on every grave was reached with more than 6,000 wreaths placed. This year there are now over 8,000 veterans interred at the cemetery.

The living wreaths are delivered in ice by volunteer truckers, two days prior to the service. There are more than 750 locations, throughout the United States, that participate in this ceremony every year, simultaneously at 12 p.m. Eastern time.

The public is invited to attend the ceremony and help place these wreaths.