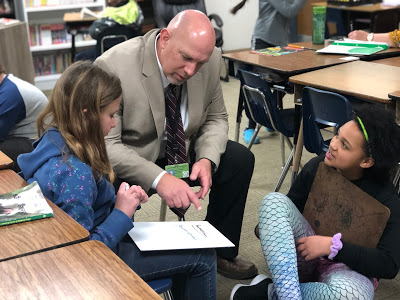 NASS is a statewide nonprofit educational organization which strives to provide support to leaders of Nevada’s 18 school districts and more than 720 public schools.

Workman was appointed as LCSD Superintendent during the November 2014 board meeting and began his tenure on July 1, 2015. Workman launched his 22-year career in education after graduating from Utah State University in 1998 with a Bachelor’s Degree in Physical/Health Education and Athletic Training. He later earned his Master’s Degree in Administration and Leadership from the University of Phoenix in 2006.

“Wayne Workman demonstrates the highest standards when it comes to learning as a school district and working to building a lasting future for students,” said Susan Keema, NASS Executive Director. “Superintendents play an integral role in our public schools as well as the communities in which they’re located. Workman exemplifies the importance of education in Nevada as we work to create new beginnings for our young learners in school districts large and small.”

Workman states, “Outside of your own personal family happenings and triumphs, nothing quite compares to being an integral part of the miracle of learning. Helping young people meet their goals and potential in life motivates me to work as diligently as possible to ensure they have everything they need to be successful. The recent pandemic has only confirmed the vital importance of public education in our society, communities and country.”

Each year the Nevada Superintendent of the Year award is presented by NASS to a member who has shown tremendous effort and dedication to enriching the lives of children and the community. Workman’s nomination for the award, which included input from peers stated in part,

“Mr. Wayne Workman came to Nevada in 2006 when I was part of hiring him to be the Assistant Principal of Dayton High School. He was to become part of the leadership team at a school that was near and dear to my heart and I knew during the interview that he was a keeper. Wayne took over the helm of Dayton High School two years after that and has been a tireless servant to the students of Lyon County and our State ever since. Wayne served as principal until moving to the district office to serve as head of Human Resources, Assistant Superintendent and was appointed as the Superintendent of Lyon in 2015 and has served in the position since. Wayne has assumed leadership roles within our organization to include representing us on the ACT committee, at legislative session, as our Secretary, Vice President and most recently as our President. Wayne had the distinction to be our leader through our adventure with the COVID-19 school shutdown. He became the voice between the superintendents and the Department of Education, carrying regular messages to State Superintendent Ebert and then relaying back to all of us. Wayne handled all of us with such grace and consideration while he was working to keep his own district on track with all the changes and adjustments we endured. He leads with calm reason and was unflappable throughout the entire thirteen-week adventure. I am so proud to announce him as our recipient of the NASS Superintendent of the Year Award and so grateful to have served with him for the last five years. Thank you, Wayne, for all you have done for your students, your families and for all of your colleagues. You serve our profession well and lead us with experience, dignity and passion. Congratulations!” – Retired Superintendent Teri White

Wayne Workman is now Nevada’s nominee for the 2021 American Association of School Administrators (AASA) National Superintendent of the Year. AASA will convene a Blue-Ribbon Selection Committee to select four national finalists in December. The four finalists will participate in a national briefing and interviews in January at the National Press Club in Washington, D.C. The National Superintendent of the Year winner will be announced in February. NASS will also recognize Wayne Workman at its 2021 Superintendent’s Academy in June at Lake Tahoe.