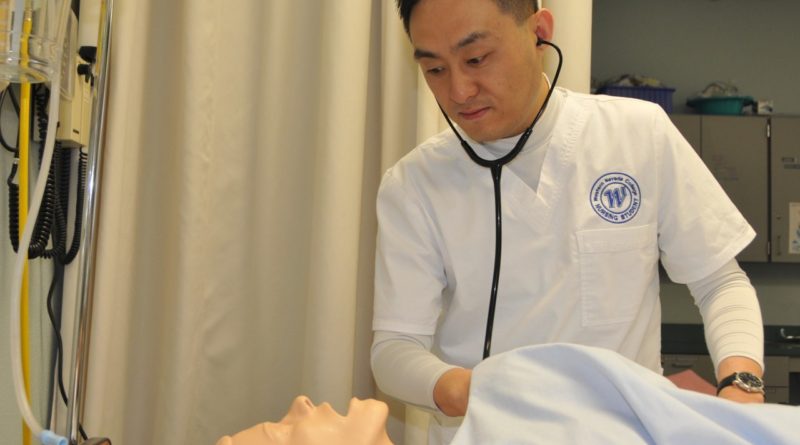 Nevada System of High Education’s Board of Regents recently recognized a Western Nevada College student and professor for distinguishing themselves academically.

“Pa seeks academia!” said WNC Nursing professor Edda Gibson. “His passion for learning is intense. He seeks knowledge way beyond his assigned class content and personifies the many aspects required in our profession. He is focused, yet there is depth in his desire to delve and research. I find him to be so refreshingly inquisitive that we too evolve to further research and inquire.”

Thomas Herring, a physics professor at WNC since 2010, was selected as the recipient of the Regents’ Teaching Award.

Kang was among the exemplary students from each NSHE institution who were honored with a $5,000 stipend.

“It was an amazing gift that you can’t imagine how much it surprised me,” Pang said.  “It is a humbling process to me. Get humble and strong through this reward.“

The Regents’ Scholar Award means much more to Kang.

“It means I must use my knowledge to serve the community and the weak and poor,” he said. “It means stay humble and keep learning for the one who needs what I learn. It means thankfulness from my parents, even though they do not know what a Regents’ Scholar award is. They were in tears and thanked my professors.”

The Regents’ Teaching Award was established in 1996. Annually, the Regents present two awards to instructors for their contributions to NSHE: one is selected from WNC, Truckee Meadows, College of Southern Nevada and Great Basin College, while a second teacher is honored from UNLV; University of Nevada, Reno; Nevada State College; or the Desert Research Institute. Each honoree receives a $5,000 stipend and a medal.

“I know that many faculty at WNC excel as teachers and being chosen from among such an accomplished group was a bit of a surprise,” Herring said. “I know that without the support of the other faculty I would not perform at the same level.”

Herring has also served as the director of Jack C. Davis Observatory at WNC since 2014. He said that there is no secret to his penchant for inspiring students, as well as the community, in physics, science and astronomy.

“A few 12- to 14-hour days every week or so will get a lot done,” Herring said. “If there’s anything special about what I do, it may be my genuine enthusiasm for science. Science is tremendously cool and sharing it is something I will always do no matter what I do for a living. I think that’s why I pursued a career as a teacher. Getting paid to help others appreciate something you like is pretty nice.”

Herring received his Ph.D. in physics from the University of Utah in 2008. While at Utah he studied amorphous semiconductors, specifically hydrogenated amorphous silicon, a material used for inexpensive solar cells. After graduate school, he lectured in physics at Rochester Institute of Technology in Rochester, N.Y., where he became interested in active learning in the physics classroom.