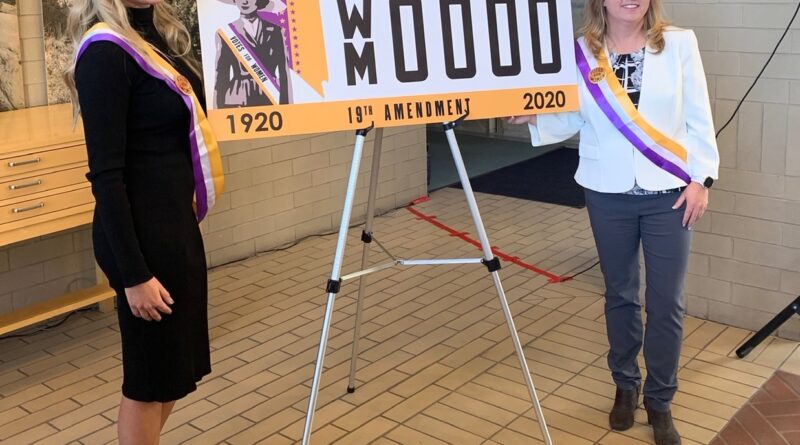 Western Nevada College graphic design student Maxine Thew won’t have to worry about her legacy as a young artist.

Starting this fall, her artwork is guaranteed to be seen every day in Nevada going forward and only the future knows when her art will no longer be visible. You see, her “everlasting” art will frequently appear on roads and freeways around the state.

Thew collaborated with the Nevada Commission for Women’s Molly Walt to create a specialty license plate to commemorate the 100th anniversary of the women’s suffrage movement that provided women the right to vote. It will be released just ahead of Election Day and will be available to the public for Department of Motor Vehicle car registrations through December. The women’s suffrage movement lasted decades before it triggered the 19th Amendment of the U.S. Constitution, which granted women with the right to vote in 1920.

Thew was honored to participate in the commemorative project and enjoyed meeting some of the state’s high-profile women.

“I had the honor of attending the license plate unveiling and meeting all the influential women who were behind making it happen, including the lieutenant governor,” said Thew, who works for Vital Signs in Carson City. “To be part of something so unique and historical was the cherry on top of the cake for me. And I got to work with women who are doing great things for women in Nevada. We, as women, need to recognize those who made great changes before us and do our part to make great changes for the generations of women who will come after us. The right to vote, and the privilege to choose who leads our nation, is one of the biggest ways in which we can do that.”

How did Thew even become part of this special project? It all started with a recommendation from her graphic design professor at WNC, Jayna Conkey.

“Back in May 2019, Molly Walt contacted me to find out if WNC had a student who could design the new Nevada Women’s Suffrage license plate. I immediately thought of Maxine Thew, one of my star students who was nearing completion of her graphic design degree,” Conkey said. “I knew Maxine had the ability to create a stunning design and was thrilled when I learned her design was adopted — a testament to her talent. I truly enjoyed working with Maxine and I am incredibly proud of her.”

Thew has finished her graphic design course requirements and plans to pursue completion of her Associate of Science degree when she returns to WNC this fall.

If you’d like to purchase one of these specialty license plates, send a $25 donation to Molly Walt, Department of Administration, Commission for Women, 515 E. Musser St., Suite 303, Carson City NV 89701.