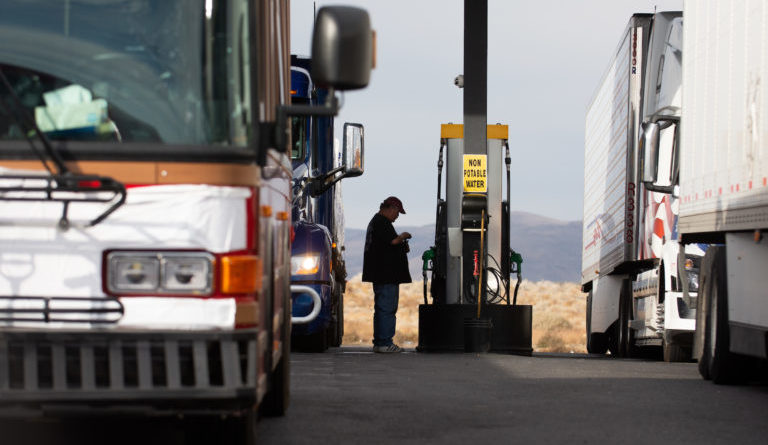 Nestled off Interstate 80, the city of Fernley operates a general budget of about $7 million, and it has more than 100 miles of roads. According to City Manager Daphne Hooper, the municipality does not have enough funds to fix its roads, even with local gasoline taxes distributed to the city.

That’s why Fernley wants its roughly 20,000 residents to vote on an advisory question to pursue legislation that would allow the city to put a five-cent tax on diesel fuel purchased by trucks and pickups. The move is unusual because Fernley has no taxing authority, unless the Legislature grants it to the city. It is also unusual because it could potentially put the city in conflict with Lyon County and other rural counties that are hoping to pass a diesel tax during the next session.

In a city like Fernley, more funding for road repairs is a huge priority, Hooper said, arguing that the city is already at a disadvantage. When Fernley was incorporated in 2001, she said the city received a lower tax distribution than other cities and has since had to look for other revenue.

“When that happened, there were some adjustments that were made that really didn’t provide as much revenue as was needed for the city of Fernley,” she said. “Like all jurisdictions we have aging infrastructure and we don’t generate all the revenue we need to keep those roads going.”

The absence of a diesel tax has been a persistent problem for rural counties since 2016.

In 2016, voters in the rural counties voted against fuel-indexing, which would have raised diesel tax revenue in their jurisdictions, while the urban counties — Washoe and Clark — voted for it.

As a result, some rural county officials have argued that municipal coffers for road repairs remain short. The state has a 27-cent tax on diesel, but that money remains dedicated to fixing state roads. Although the idea of an increase has been unpopular in the past, officials for Lyon County and Fernley both agree with the need for an increase in the diesel tax.

But that’s where their agreement ends. Lyon County Manager Jeff Page said that he believes the best way to get a local diesel tax is through the Legislature, and he is concerned that the city’s advisory question to pursue its own legislation could undermine the effort underway. The counties hope to push for a diesel tax next year after a failed attempt in the last session. If the advisory question fails, Page said he is concerned it could make the multi-county effort harder because it would show that his county’s largest city did not support raising the tax.

“I feel like I have one leg on the dock and one leg on the boat and my wife let the rope go,” he said, noting that there are downsides for the county effort if the question passes or fails.

And for Lyon County, Page said diesel tax revenue was crucial. The county already has to repair old roads as it thinks about building new roads to keep up with spillover growth from the Tahoe Reno Industrial Center.

“If I had to replace roads that are at or near failure right now, I’m $32 million in the hole already,” he said.

In the last legislative session, the counties pushed for a diesel tax through Senate Bill 439, which would have allowed counties with fewer than 100,000 people to enact a five-cent tariff. The bill passed through the Senate with no opposition, and it even had support from the Nevada Trucking Association, which typically opposes such taxes. According to testimony, the trucking association was supportive, in part, because the bill included funding for truck highway stops.

But the bill failed to make it through the Assembly, and now Fernley wants to hedge its bets.

Hooper, the city’s county manager, said that the advisory question was introduced in case the counties cannot get a bill through the Legislature to create a local five-cent diesel tax. If the advisory question is successful, Fernley voters would be directing the city to pursue its own legislation. That could mean two conflicting bills: one from the county and one from the city.

Hooper did not rule out the possibility that the city could collaborate with the counties.

“There will probably be some discussion about what that looks like,” she said.

It might be difficult for Fernley to convince the Legislature to allow it to create its own tax. The tax that Fernley is advocating for in the advisory question would apply only to the Fernley city limits and be controlled by the city to help it maintain its more than 120 miles of roads.

According to statute, a city can only enact a tax if it first places an advisory question on the ballot. Even if the question passes, Page said the Legislature might be reluctant.

“For the first time in the history of Nevada, it would give the city the ability to tax,” he said.

But despite the disagreement, Page understands where Fernley is coming from.

“I’m not here to bag on the city of Fernley: They have significant road issues like I do,” he said. “If I were in [the mayor’s] shoes, I would be doing the same thing.”