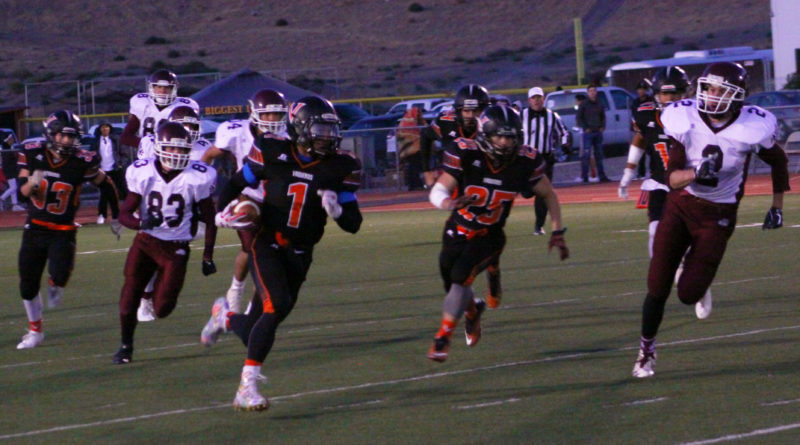 With a 35-14 win over Elko last Friday, the Fernley Vaqueros stayed tied atop the Northern 3A with Spring Creek.

What they didn’t do, according to coach Chris Ward, is play well.

Aaron Proctor returned the opening kickoff for a touchdown, Willy Pritchard ran for 102 yards and three touchdowns on 15 carries and the Vaqueros’ defense mostly bottled up an Elko offense that attacked Fernley with some unexpected wrinkles.

But Ward was unhappy with his team’s offensive execution, saying the Vaqueros didn’t respond well when Elko came out in a defense the Vaqueros hadn’t seen before.

Proctor returned the opening kickoff 80 yards for a touchdown, after Fernley had elected to make Elko rekick twice after the first two kickoffs went out of bounds.

Elko answered right back with a 61-yard touchdown run by quarterback Ryan Wickersham, to take a 7-6 lead with 8:30 left in the first quarter.

Elko caught the Vaqueros off guard by abandoning their Wing-T offense and instead coming out in a spread offense with an empty backfield.

But Ward said the Vaqueros were able to adjust quickly to Elko’s offensive changes, and Elko only managed 139 yards on its other 39 carries.

Defensively, Elko, which Ward said normally plays a 3-man front, dropped its two defensive ends off the line of scrimmage, leaving the nose tackle as the only down lineman.

“We panicked, instead of using our rules and assignments and doing counts,” Ward said. “Our kids had never seen what they were doing before and they panicked. I’ve never seen that defense before.”

Fernley turned the ball over on an interception in the end zone on its first possession, and went three-and-out on its second. But Tyler Dennis intercepted Wickersham at the Elko 16-yard line, setting up a 7-yard touchdown run by Pritchard to put Fernley back up 12-7 with 5:29 left in the first quarter.

Fernley then recovered a pooch kick of the ensuing kickoff, it’s second successful onside kick of the game, and a 35-yard run by A.J. Kuha set up a 4-yard touchdown by Pritchard for a 19-7 lead with 5:06 left in the first quarter.

Fernley stretched the lead to 26-7 on a 15-yard touchdown pass from Zach Burns to Kuha with 34.9 seconds left in the half, after Elko had kept the drive alive by committing a personal foul on 4th-and-11 from the Fernley 42.

In the third quarter, Harry McDonald sacked Wickersham in the end zone for a safety and a 28-7 lead, but Elko cut the lead to 28-14 with 9:43 left in the game, then recovered an onside kick. But Thomas Chapin, who had 3.5 sacks, pulled down Carter Alvarado for a 9-yard loss on 3rd-and-18, and Elko never threatened again.

Pritchard capped the game with an 11-yard touchdown run with 48.7 seconds left.

“That’s one of those games that even though you win, it doesn’t feel real good. At least not for me,” Ward said. “It’s about more than wins and losses, it’s playing well and that’s just something we just did not do.”

Ward said the linemen were confused on who to block, and he said some of the skill position players don’t know their assignments on every play.

“We were too lax getting out of the huddle, and also we’ve got some guys that still don’t know their assignments and they’re trying to get them cleared up in the huddle and our quarterback, who knows all of their assignments, is trying to tell them what to do, and that’s taking up time too,” he said.

Ward, who also said after the Vaqueros beat Lowry 44-0 that they didn’t play as well as he’d hoped, said it can sometimes be hard to get players to understand they didn’t play well when the win.

“A lot of people don’t see it from our point of view, the things that we see,” he said. “It wasn’t a very good game for us.”

Friday the Vaqueros will put their 4-0 league record on the line at Sparks, which is 2-3 overall and 2-2 in league play under first-year coach Brad Rose, but who also beat Elko, 24-13, the previous Friday.

“They’re improved, they seem to be playing hard, and I think they’re excited about playing,” Ward said.  “They beat Elko and they did pretty good with Spring Creek, so I think they have some confidence.”

The Railroaders run a spread offense with multiple 3- and 4-receiver sets, but also run some 3-back sets.

Defensively Ward said they play mainly a 3-4 front, but also use a 4-man front at times.

But after seeing how Elko disturbed the Vaqueros with completely new schemes, Ward said the Vaqueros have to be ready to respond quickly to any changes. Because Fernley’s flexbone offense is unlike any other offense in the league, Ward said teams will often put in special schemes specifically to defend the option.

“We are trying to get this squared away so every game we get a little bit better, and this last game, we don’t feel like we did that,” Ward said. “We actually took a little step back.”