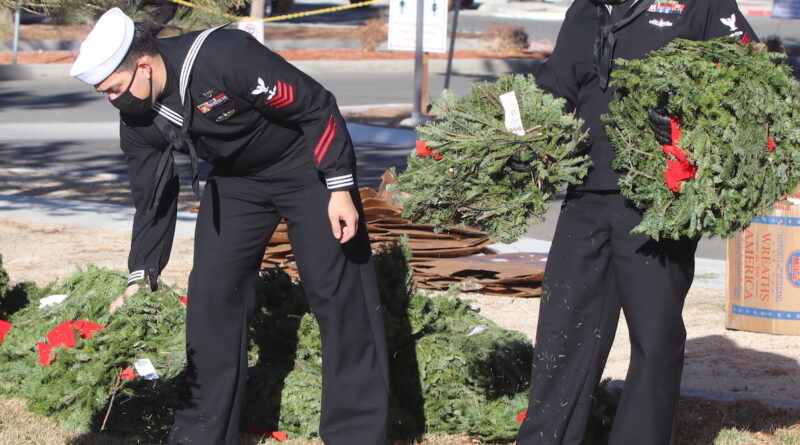 More than 8,000 veterans are interred at the state cemetery in Fernley

Thousands of green wreaths with neatly tied red ribbons reached as far as the eye could see on Saturday morning at the Northern Nevada Veterans Memorial Cemetery in Fernley.

In a world altered by the effects of state and local coronavirus restrictions placed on large groups, individual volunteers and a number of service organizations— both civilian and military — placed wreaths on every gravestone and at the columbarium wall on a clear, but chilly morning at the NNVMC, one of two state cemeteries that serve as the final retiring place for the area’s veterans.

“We had enough wreaths,” said Brett Palmer, director of the Nevada Veterans Coalition, a volunteer organization that oversees many of the activities at the NNVCMC. “It’s been tough with funding this year because of COVID-19. We haven’t been able to get out and do our usual work.”

Yet, the community recognizes the importance of this yearly event, and according to Palmer, people “came through in the last stretch.”

Kat Miller, director of the Nevada Department of Veterans Services, said despite the pandemic, volunteers still find a way to honor the veterans.

“I don’t think the meaning has been lost in times like this,” she said before volunteers began placing wreaths. “We understand what’s important, and certainly we are remembering and honoring our veterans.”

Palmer also received an $11,500 check from Tony Martinez of the Nevadans 4 Vets organization in a short ceremony conducted near the pavilion. Every year, Martinez organizes a golf tournament with proceeds going toward the Wreaths Across America program at NNVMC. Palmer said the coalition is thankful for the donation because the proceeds helped with the purchase of wreaths for this year.

Donations accepted now, said Palmer, will be used for next year.

Wreaths Across America is a special day to honor veterans in every state and overseas and to remind the nation of their sacrifices during both peacetime and at war. Wreaths Across America also took place Saturday at other local cemeteries in central and western Nevada. The event began in the early 1990s to thank veterans for preserving the American way of life. The NVC became involved with the program in 2007.

Because of the significance of the program and its growth, Palmer said Wreaths Across America is the second most important veterans’ ceremony, after Memorial Day.

This day marked the third year Chief Petty Officer Charles McKenzie of Naval Air Station Fallon attended the ceremony. In previous years his family was able to volunteer, but not this year due to COVID-19 restrictions.

“It’s an absolute honor,” he said of his participation. “A lot of our training is focused on the past, those who have gone before us. It’s also to honor and meet the families, hear their stories and pay honor to their veteran.”

“We’ll talk to the family first, but on the very first one I delivered today, the lady lost her husband this year due to the COVID complications. It hit pretty hard, very fresh,” McKenzie said.

Fernley residents Paul and Sandra Persson said it’s an honor to pay their respects to the veterans interred at the NNVMC.

Paul Persson, past commander of the Combat Veterans Motorcycle Association chapter 41-2 in Reno, said his father is interred in the Willamette National Cemetery near Portland, Oregon.

“It’s an absolute honor to come out,” he said. “The people we honor every year are our brothers and sisters in arms.”

A number of members from the Combat Vets also volunteered to lay wreaths. Members from all military branches served in combat, and in civilian life, help veterans and support charity events.

Sandra Persson said she has a deep respect for the military. In addition to her husband serving, she said her father retired from the military after 23 years. Her thoughts turned to the veterans, those who died in peacetime and in war.

“They gave their lives to serve for us, for our freedoms,” she said. “For me that means everything. I have a deep respect for everyone who served. I don’t think we, as citizens, of the United States realize actually realize what they went through in combat.”