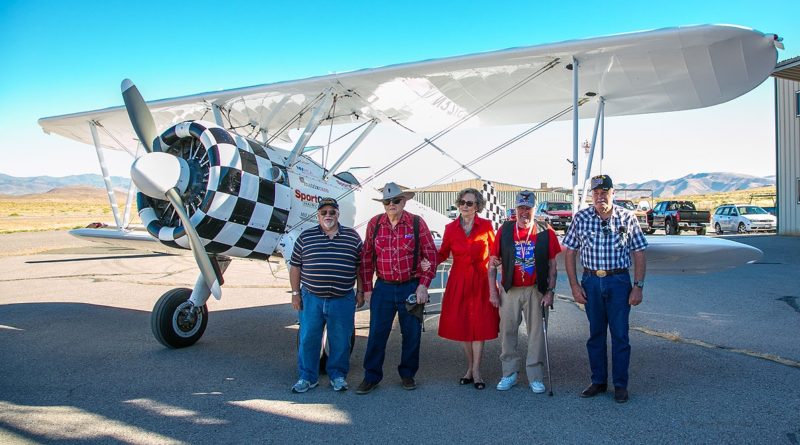 It had been 55 years since Doren DeNeal last flew a biplane, so as he climbed into the cockpit of a 1940s Stearman PT-17 Wednesday morning at Tiger Field, pilot Darryl Fisher asked him if he’d like to take the controls.

“I might take it for a minute or two, but I’m not going to take off or land,” DeNeal said.

DeNeal was one of five people, four veterans and a former member of President Richard Nixon’s staff, who took flights Wednesday in the open cockpit of the World War II-era biplane, courtesy of the Ageless Aviation Dreams Foundation, which takes veterans and seniors who live in senior living facilities on flights in restored vintage planes.

In January 1961, DeNeal flew one of the most famous biplanes in America, the Meyers OTW used in “The Misfits,” starring Clark Gable and Marilyn Monroe.

As a boy, DeNeal’s father was a flight instructor in Nevada City, Calif. and after serving as an Army paratrooper, DeNeal became a commercial pilot in 1961.

But although he’s logged many miles in the sky, he was he was honored to be chosen to participate in Wednesday’s event.

“I’ve never done this before,” he said. “A lot of effort goes into something like this.”

“When I was in an open cockpit, I was only 18 years old,” Sherman said. “I always loved the open cockpit.”

Crossland found out only last week he’d been nominated and chosen of participate in Wednesday’s Ageless Dream Flights.

“It was terrific, I loved it,” he said. “He would bank, and you’re looking straight down at the ground. There was a couple of bumps, but it was a lot smoother than I was thinking it was going to be.”

Kase and Green flew civilian aircraft together after their military careers, and Kase couldn’t help thinking of his buddy as he looked back toward the ground.

“He’s a great guy and it’s just a crying shame he couldn’t be here today,” Kase said. “For me it’s a special feeling and it was exhilarating. It brings back a lot of memories, part of the camaraderie of old buddies, old pilots.”

Cathy Roth was the only nonveteran involved in Wednesday’s Dream Flights. She is the niece of Lois Brooks Hailey, who helped create the Women’s Airforce Service Pilots (WASP). Hailey and all the WASP were awarded the Congressional Medal of Honor and were inducted into the Texas Aviation Hall of Fame

Roth said the flight brought back remembrances of her aunt, especially when she saw Pyramid Lake.

“Her wish was to send her ashes off Pelican Point at Pyramid Lake, and they were left nine years ago, and others in some of her favorite places in Texas,” Roth said. “My aunt was wonderful.”

Fisher, who founded the Ageless Aviation Dreams Foundation as a tribute to seniors and United States veterans.

“We use this airplane for one purpose, and that is to say ‘Thank you’ to our seniors and our veterans for what they have done for us,” Fisher said.