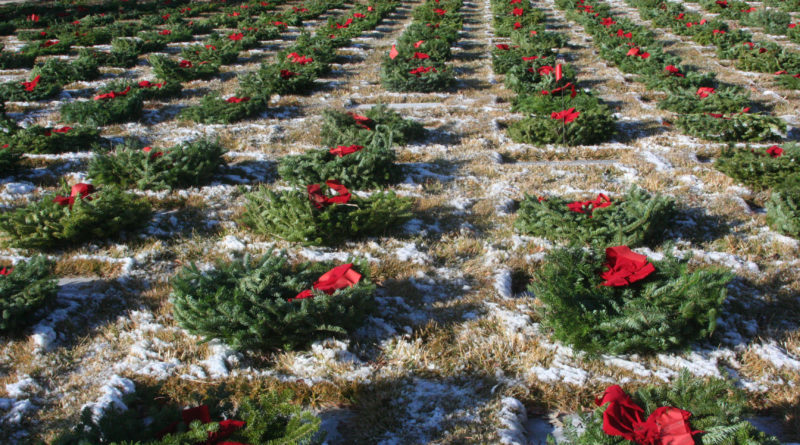 The Nevada Veterans Coalition is still a little short of its goal of placing a wreath on the grave of every veteran during Wreaths at the Northern Nevada Veterans Memorial Cemetery.

If you have not already made a donation to purchase a wreath, there is still time to do so. You can go to nNVC.org and click on the wreath icon for an order form or send in a donation to NNVC, P.O. Box 415
Fernley, NV, 89408.

At 9 a.m. on the third Saturday in December, the Nevada Veterans Coalition (NVC) will be placing wreaths on veteran’s graves at the Northern Nevada Veterans Memorial Cemetery in Fernley.

In 2007, when the NVC became involved with the Wreaths Across America project, 28 wreaths were placed on veteran’s graves, with the goal to someday place a wreath for every veteran interred at the cemetery.

For the last three years that goal was reached. This year the NVC hopes to repeat that; however, there are now more than 8,000 veterans interred at the cemetery. The NVC needs your help.

These are living wreaths, delivered in ice by volunteer truck drivers who deliver them two days prior to the service. There are more than 750 locations throughout the United States that participate in this ceremony every year, simultaneously at 12 p.m., Eastern time.

With your help, the NVC and more than 1600 volunteers will be able to honor our veterans who have given so much.

The public is encouraged to attend the ceremony and help us place these wreaths. You can order a wreath by going to NVC.org and click on Wreaths Across America for the .pdf form, or mail your donation to: Nevada Veteran’s Coalition, P.O. Box 415 Fernley, NV 89408.

Every penny received goes to the purchase of a wreath. The price is $15 per wreath, and for every two wreaths purchased the NVC receives one additional wreath free of charge.